75th Anniversary Tour - End of War in the Pacific

$10,490 per person based on double occupancy, $1,550 single occupancy supplement if rooming alone

The itinerary will include visits to Hawaii, Saipan, Tinian, and Guam. This memorable tour will culminate in Honolulu with access to 75th anniversary commemorative activities.

There is limited availability on this tour, which is likely to sell out very soon. 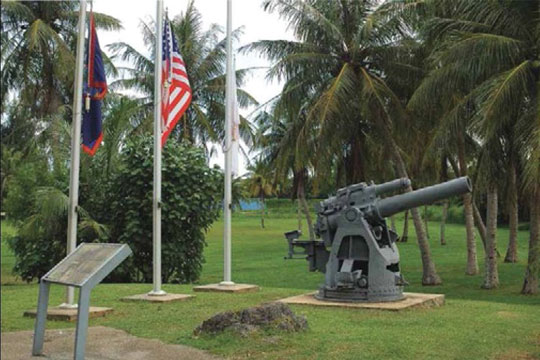 Hawaii Our tour will begin with a 6 p.m. welcome reception and dinner at the Honolulu hotel. Meet the staff of Stephen Ambrose Historical Tours, as well as other tour participants. A highlight of our time in Honolulu will be Ford Island, the centerpiece of the Pearl Harbor National Historic Landmark District and adjacent to Battleship Row.

The original airfield, air tower, WWII hangars, a collection of bungalows and officers’ housing remain on the site. Battleship Row, home to the USS Arizona Memorial, is built over the remains of the sunken battleship USS Arizona, the final resting place for many of the 1,177 crewmen killed on December 7, 1941. The loss of life on this “Day of Infamy” became the focal point for a nation that was previously divided over the issue of involvement in the war.

The National Memorial Cemetery of the Pacific and the Honolulu Memorial, is referred to as the Punchbowl. Located in Puowaina Crater, roughly translated, “Puowaina” means “Hill of Sacrifice.” Here we will hear an overview of the entire Pacific War.

Saipan and Tinian The capture of Saipan in 1944 was one of the turning points of the war in the Pacific. Following Japan’s surrender in 1945, Vice Admiral Shigeyoshi Miwa of the Japanese Navy said, “Our war was lost with the loss of Saipan.”

In Saipan, our group will visit the Invasion Beaches and battle sites of Operation Forager. Our historians will discuss the combat between the Americans and the Japanese during the 24 days it took to secure the island. Names that testified to the bitter fighting were given, such as Death Valley, Purple Heart Ridge and Harakiri Gulch, where the last major battle of the island occurred.

We will visit Aslito Airfield, as well as Mount Topotchau, and Marpi Point. It was at Marpi Point that hundreds of Japanese civilian families jumped to their deaths. Droves of Japanese soldiers also committed suicide at the many cliffs around Saipan, either jumping to their death, or by grenade. Tinian is perhaps most famous for being the departure site for the atomic bomb. The USS Indianapolis, prior to its departure for the Philippines, delivered this secret cargo to Tinian. Our historians will talk about the USS Indianapolis, the sinking of the ship and survival of the crew in the shark-infested waters. While in Tinian, we will spend some time focusing on the Tinian airport, which in 1945, was perhaps the busiest and largest in the world. At North Field, look for the plaques that mark the location of the bomb loading pits for the “Enola Gay” and “Bockscar.”

Guam Our study of Guam will begin with the Invasion Beaches, Asan and Agat beaches. These two invasion beaches, separated by the Orote Peninsula, are located six miles apart, on the west central coast of Guam. Asan Point is a primary visitor area where the overall story of the Pacific Theater is told by means of museum exhibits. Historic sites, including a number of gun emplacements, caves, foxholes and pillboxes are located within the Asan Beach Unit. Gaan Point, at the center of Agat Beach, is another place of interest, which also contains many WWII sites and structures. The beach and offshore area here are relatively unspoiled and provides a good impression of how they looked in 1944.

The Japanese attacked Guam on December 7, 1941, just hours after Pearl Harbor. The U.S. Navy Seabees began constructing Andersen AFB as soon as American Marines liberated the island in July 1944. It soon became the home for the B-29 Superfortress bombers that could range as far as Japan. Andersen is the farthest west strategic air base that the U.S. maintains in the Pacific.

One interesting aspect of the recapture of Guam was the role played by the Navajo Indian servicemen, who operated the radios openly conversing in their native tongue, unknown to the Japanese. This successful tactic completely baffled the Japanese, who expected to hear coded English. Another interesting place to visit in Guam is The War Dog Memorial. Located on the Naval Facility, it honors the Dobermans that served with the Marines in 1944 and who were killed in action performing duties such as leading scouting parties, exploring caves, and serving as sentries.

Honolulu We will return to Honolulu in time to commemorate the 75th Anniversary of Victory over Japan on September 2, 2020, where we will participate in the commemorative activities.

Japan’s formal surrender took place aboard the USS Missouri, anchored in Tokyo Bay. Nazi Germany had surrendered in Europe in May and the war had come to a close with Japan in August. Japan’s formal capitulation in the Pacific ended six years of war and ushered in a welcome peace to this part of the world.