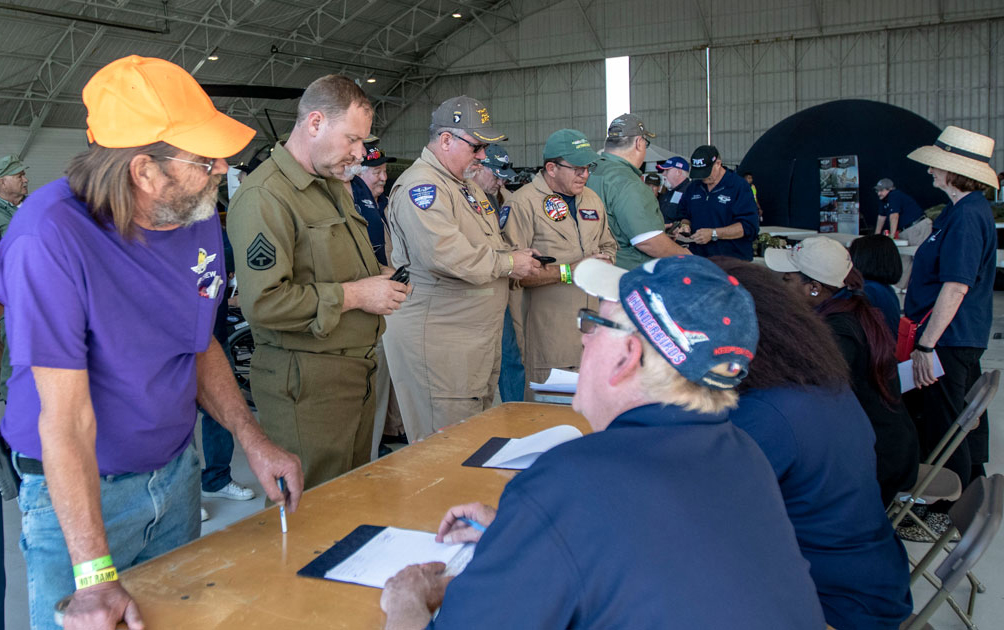 On August 13, the CAF Nominating Committee put forth four names to fill positions that are expiring. Those going off the General Staff at the end of 2021 are Steve Barber, Bob Lawrence, Mark Novak, and Doug Rozendaal. Barber is eligible for re-election to serve a second three year term. The nominees presented by the Nominating Committee and approved by the General Staff are Steve Barber, Bob Stenevik, Gordan Webb, and Eric Zipkin. Nominees will also be accepted from the floor during the Oct. 29 General Membership Meeting.

The 2021 General Membership Meeting will be held in the Victor N. Agather Hangar at the Henry B. Tippie National Aviation Education Center (NAEC), Dallas Executive Airport, Dallas, Texas. The meeting begins at 4 p.m. and eligible voters may pick up a ballot beginning at 3 p.m. on Oct. 29. If you will be unable to attend to vote in person, you should request an absentee ballot by emailing dblalack@cafhq.org with your name and Colonel ID number. To confirm your request has been received, all emails will be acknowledge by HQ. If you do not receive an acknowledgement within 48 hours, please contact Donna at dblalack@cafhq.org or (214) 330-1700, ext.102.

If you would like to mail in your request for an absentee ballot, please use the form below. 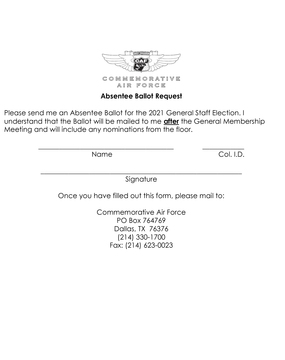 Colonel Stephen “Steve” W. Barber has been a member of the CAF for approximately 28 years and is a life member. He has served several terms on the CAF General Staff and is honored to have been nominated. He is a member of several different wings and squadrons. He has served as Wing Leader for the CAF Southern California Wing numerous times. As a Flight Safety Board member, one of his greatest concerns is safety.

Barber has been a pilot for over 40 years. He currently holds ATP multi-engine, commercial, instrument, flight instructor and ground instructor ratings. He has an unlimited LOA for single and multi-engine aircraft and holds an LOA for the P-51, YAK-3, YAK-11, F6F, C-46 and F8F.

His particular concerns for the CAF are safe operations of the CAF’s priceless aircraft assets, sound fiscal management, membership growth and a level playing field for all members.

Colonel Bob Stenevik feels he has been blessed with the opportunity to be a part of the CAF and extremely fortunate to serve on the Headquarters’ staff as a member and as an employee. He started as the Director of Safety and Flight Operations in 2005 and was promoted to Vice President of Safety, Operations and Maintenance in 2008. He is very grateful for all the help he received from many people in the units, fellow staff members, and the General Staff during the nine years in that position. In those years, he managed to visit all but four CAF units before retiring in 2017.

In retirement Bob continued as the Chair/Co-Chair of the LHFE Industry Group, participated as a member of the 2020 Arsenal of Democracy planning group, helped with some of Operations’ projects and participated in various industry and FAA meetings. In 2018, he was honored to step in as the interim CEO and President of the CAF. This call back to work only magnified his commitment to and passion for being a part of this special organization. The most significant thing to him in all these experiences was his induction into the CAF Hall of Fame in 2018.

Bob retired again in 2019 and continues his involvement as he did after his first retirement. Bob lives in Jasper, Texas with his wife Libby and their dog Smokey.

In 2017, Col Gordon Webb retired from a 40+ year career in the communications industry, serving the Public Safety community, as a key account manager leading large projects in the State of Michigan. Upon retirement he realized that his second career was volunteerism. In addition to his contributions with the CAF Tora Group, including marketing, contracts, and Lead for the Tora Bomb Squad he serves his community as Village President and is a member of the Downtown Development Authority (DDA). He also serves as Vice Chair on the board of a historic non-profit local theater.

Upon accepting the role of Pyro Lead for Tora in 2007 Gordon became a life member of the CAF. That year he attended his first ICAS Conference which was an eye-opening introduction to the airshow industry. From there Tora pyro operations have been a profitable contribution to the bottom line contributing to the care of our aircraft. Gordon serves as chairperson for the ICAS Pyro Safety Committee, and as a member of the ICAS Safety Committee representing Tora and the CAF.

Gordon recognizes and supports the CAF’s goals of education, historical preservation, and membership. He would like to help all aspects of the CAF to do a better job of promoting the CAF. Every year we are exposed to millions of potential members and contributors. We need to make sure our message is consistent and encourages participation and membership. When was the last time you asked someone to join the CAF?

Col Eric Zipkin is comparatively new to the CAF, having become a Colonel in 2017. WWII aviation has, however, run throughout his life. Eric’s father served in North Africa and Sicily with the Army Air Corps and later learned to fly under the G.I. bill and Eric’s childhood was steeped in the impact of the Greatest Generation.

As an entrepreneur and professional aviator, Eric founded Tradewind Aviation in 2001. He has grown the business to a scheduled private airline with 25 aircraft, almost 200 employees and bases in the New York metropolitan area and San Juan, Puerto Rico.

Through his business and his family history, Eric was introduced to warbirds—flying the C-45, T-6 and ultimately the C-47 Placid Lassie, which he flew to Normandy for the 70th anniversary of the D-Day Invasion, leading the D-Day Squadron. Eric now sponsors and flies the Rhode Island Sea Control Squadron’s T-6 and That’s All Brother in addition to a private P-51 and TBM Avenger. Eric vowed to bring back a full squadron of C-47’s from the U.S. for the 75th D-Day Anniversary—and thanks to the support of teams like the CAF’s That’s All, Brother and D-Day Doll—he was able to make that project a reality.

Eric hopes that he may serve the CAF membership by crafting a long-term path forward that enhances relevance for the future based upon the successes of the past.

Eric graduated from the Wharton School of the University of Pennsylvania and attended law school at Pace University. Eric lives in Middlebury, Connecticut with his wife Ann, and sons Luc (16) and Ben (14), all of whom are pilots. They own and fly a J-3 cub, Cessna 170, Cessna 180, Piper Aztec, and Beech 18/C45.