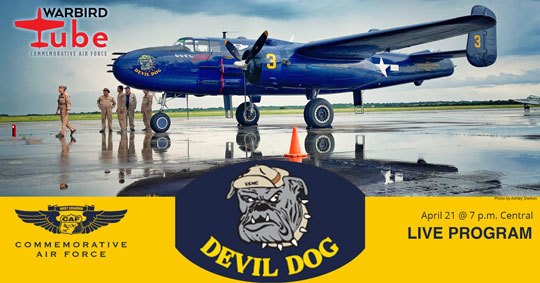 Not many people know that the U.S. Marine Corps flew bombers during World War II. One of the missions of the Devil Dog Squadron is to keep that piece of history alive. PBJs came about by chance. In 1943, North American, the B-25s manufacturer, produced more B-25s than the Army Air Corp could use. Approximately 800 of the airplanes were offered to the U.S. Navy. Although the famous Doolittle Raid was a successful carrier launched formation of B-25s, the Navy had little use for the extra airplanes. They were too large for regular carrier duty. The U.S. Marine Corps was looking for a medium bomber. They agreed to take the B-25s and use them for "night heckling", anti-shipping missions or close air support of beachheads and landings. Taking the unwanted equipment was nothing new for the Marines, they often received obsolete or surplus equipment from the Army or Navy. Learn more about this famously touring aircraft, known as Devil Dog.