Relay in the Sky to Honor Healthcare Professionals and First Responders

MISSION ACCOMPLISHED! The Relay In The Sky Team, (November 2, 2020) 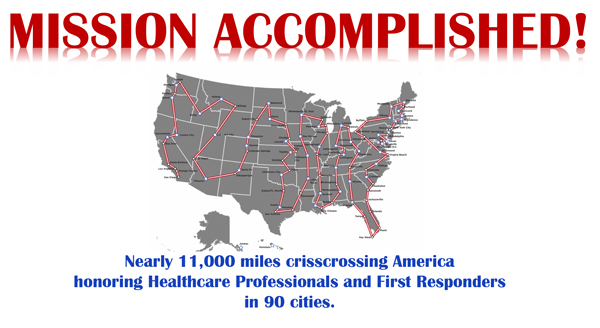 We are close to the end of what has been only an extraordinary journey, one with a few bumps along the way, but mostly positive highs!

One of the best highlights has consistently been the emotional, heartfelt statements of thank you and appreciation from the Healthcare Heroes and First Responders for our efforts, as they have not received appreciation like this elsewhere. Hearing this has made us feel like all the effort and unexpected costs have been worth it!

Not surprisingly, we have learned so much along the way, and in the next few weeks we will share more with you.

Most importantly what we’ve learned that with more time this concept of this Relay In The Sky is extraordinary and with more time and with even more of your participation and support we can literally bring America together to support important causes that will make a difference. We will expand on this further shortly.

In the meantime, we are still flying the final legs and will arrive in Washington DC at Ronald Regan Washington National Airport for our Closing Ceremony on October 30th on the West Lawn at the US Capitol where we will unveil “America’s Flag” will be unveiled by Healthcare Professionals, First Responders and Police.

Also, we just learned yesterday that New Jersey Governor, Phil Murphy could not attend our “Hometown” Ceremony, but the First Lady will attend!

Lastly, attached is a letter from Virginia Governor Ralph Northam praising our efforts!

Have a great weekend! 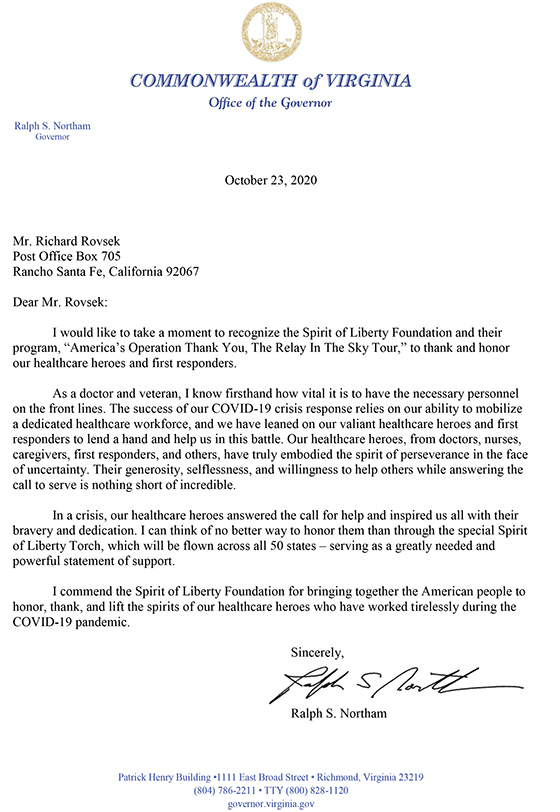 Hello America’s Operation Thank You, The Relay In The Sky Team (October 9, 2020)

Yesterday we had some great stops but the best ceremony was in Oklahoma City where the Police Chief send 10 uniformed officers including some on motorcycles to the “Hometown” Ceremony held at Atlantic Aviation FBO. The Spirit of Liberty Torch was passed to the police officers, first responders and healthcare professionals.

Tomorrow is another special day with Missouri Governor Mike Parson participating along with many local Doctors, Nurses and First Responders. Jefferson City KRCG 13 News will air an interview with Richard Rovsek tomorrow am and the TV crews will attend the ceremony tomorrow at 4:15 pm. We will share links and photos.

We also had a great day in Jefferson City, the Capitol of Missouri earlier today! Our “Hometown” Ceremony was a great success with Governor Mike Parson attending. Police Chief Roger Schrader brough some of his finest officers and we had several healthcare staff members and nurses Rhonda Shimmens, Glenda Raithel, and Marsha Wallace from Missouri’s St. Mary’s Hospital. Please view the attached photos.

Governor Parson presented the Missouri State flag which will be sewn with the other 49 State flags to create “America’s Flag” which has never been done before. America’s Flag will be created by the Spirit of Liberty Foundation to symbolically bring America together for the Closing Ceremony at the U.S. Capitol on Friday, October 30th. Approximately 100 Healthcare Heroes and First Responders will carry this dramatic 25’x30’ flag down the National Mall to honor America’s Heroes and to bring America together.

As always, we would love to hear your comments and feedback! 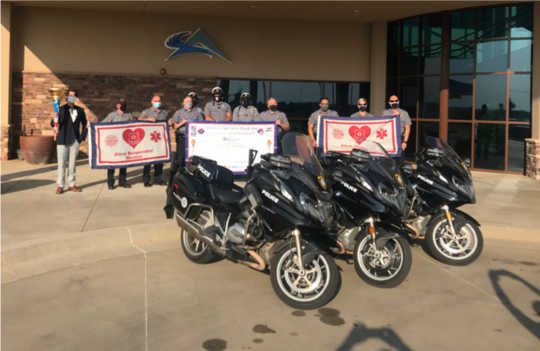 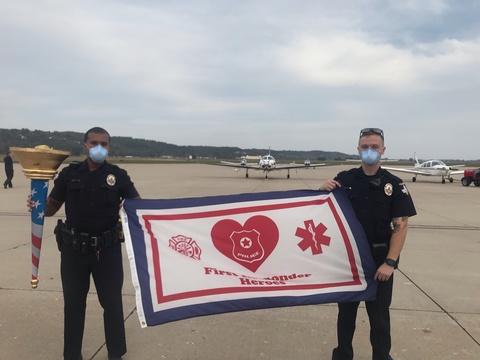 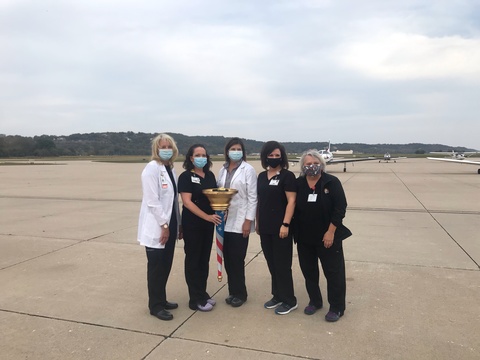 General Aviation Operators Invited to Participate in Relay in the Sky to Honor Healthcare Professionals and First Responders (September 4, 2020)

Aircraft operators are invited to participate in America’s Operation Thank You: Relay in the Sky, a tribute to healthcare professionals and first responders. It’s a unique way to leverage general aviation to honor those who have been putting their lives on the line during the COVID-19 pandemic. As aircraft operators share their respect and admiration for these heroes, they will also be demonstrating to the country how general aviation connects communities, from big cities to small towns, in a way that no other form of transportation can.

Operation Thank You will consist of 98 flight legs with three volunteer aircraft to be confirmed for each leg. The event organizer Spirit of Liberty Foundation created a composite three-foot-tall lighted torch that will be transported on each leg. At every stop, governors, mayors, dignitaries and honorees will greet the flights with a short ceremony at one of the participating FBOs. Flags and banners will be left behind at each stop to permanently commemorate Operation Thank You. The first Relay In the Sky flight will launch from San Diego on September 23, with the final leg delivering the artifacts to Washington, D.C. on October 30. Spirit of Liberty Foundation Chairman Richard Rovsek is envisioning the relay to culminate in the torch leading a ticker tape parade through downtown D.C.

The Commemorative Air Force joins with several other organizations such as NBAA, Aircraft Owners and Pilots Association, Experimental Aircraft Association, General Aviation Manufacturers Association, National Air Transportation Association, Commemorative Air Force and others in the general aviation community in helping to raise awareness of this event within the aviation community. FBO sponsors at each airport will host local dignitaries as well as healthcare workers and first responders. The American Hospital Association is participating by arranging groups of doctors, nurses, emergency medical technicians, and other health care workers from among its 5,000-plus membership to greet each incoming flight. “Participating in Operation Thank You: Relay in the Sky will be a lasting story to tell,” said Rovsek. “This project is more than just a ‘thank you’ and an honor. It will demonstrate the power of general aviation and lift the spirits of healthcare workers and first responders across the country.” Those interested in signing up to participate in the relay can visit https://bit.ly/3kSPoSf. 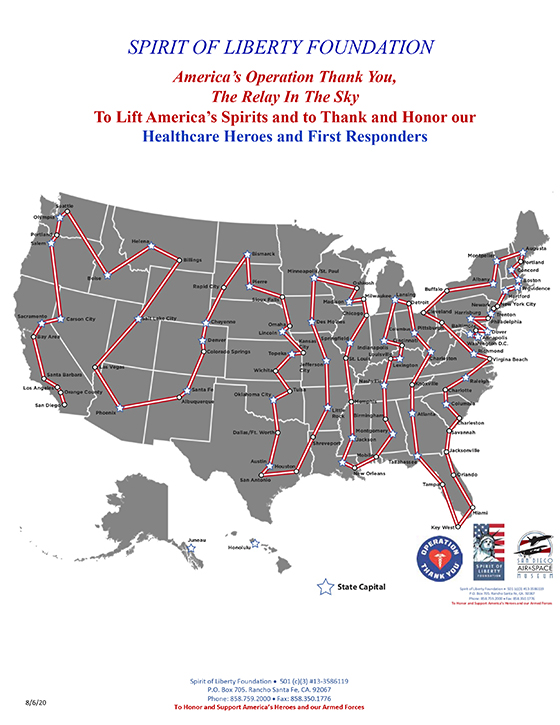 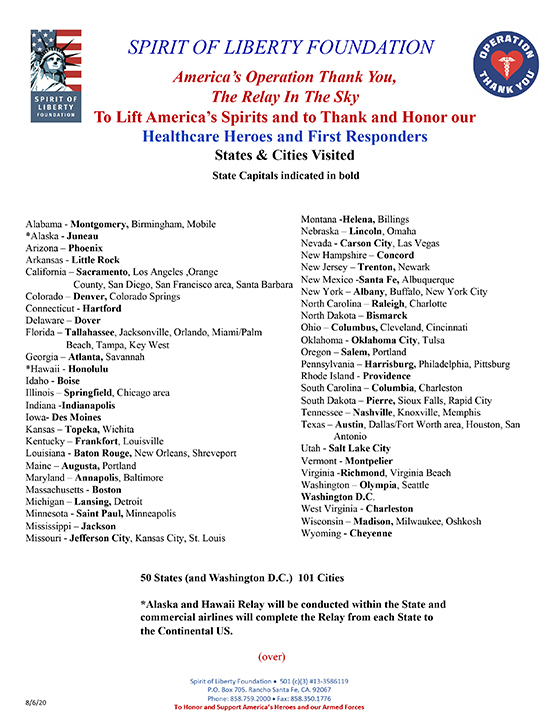