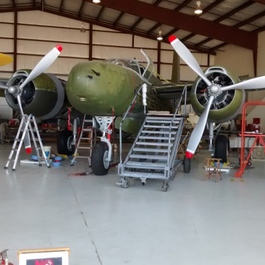 A-26C 44-35643 (N626SH) was built at the Douglas Plant in Tulsa, Oklahoma. It was used as stateside as a trainer for A-26 Combat Crews until WWII ended. After the war she was converted to the RB-26C configuration and was later sold to the French Air Force where it flew combat reconnaissance missions in Indochina for 18 months. After her service with France, she returned to the U.S. and was converted into a corporate transport flying in the U.S. and Canada before being acquired by the CAF. After a landing mishap, she was grounded for 28 years; 22 of which was during the restoration by Sierra Hotel. She returned to the skies over Oklahoma in 2020!