In 1939, under pressure from the NAACP and the black press, the War Department authorized the creation of an ALL black flying unit. Tuskegee Airmen Leahr was a member of the 332nd Fighter Group and flew as a combat pilot with the 301st Squadron. John, prior to becoming a Documented Original Tuskegee Airmen (DOTA) was a Cincinnati native who graduated from Withrow High School. He attended Wilberforce University and the University of Cincinnati. This gave him the two years of college needed to become an aviation cadet and not be drafted. John H. Leahr was one of 1,000 men who was trained and earned their wings at the 66th Air Force Flying School in Tuskegee, AL. He was one of 27 out of a class of 60 who graduated on 28 July 1943 with Class 43-G-SE and was assigned to the 301st. On that date, he received his silver wings and was commissioned as a 2nd Lt in the United States Army Air Force. On 5 September 1946, the Government disbanded the fighter units and closed the Tuskegee, AL Base. Following his career as a combat pilot, 1st Lt Leahr became one of Tuskegee’s 1st black flight instructors for training on multi-engine planes. 1st Lt John H. Leahr began his civilian life in early 1946. He was employed for ~9 years at General Electric Aircraft Engines in Evendale, OH. He was the 1st black to pass Ohio’s Financial and Securities license exam and the first to become Vice President of an OH brokerage firm. Leading up to his retirement, he also worked ~10 years as an Administrator for the Cincinnati Gas and Electric Company. In 1948, the Tuskegee Airmen’s impressive skills and steadfast service contributed to President Harry S. Truman issuing and signing Executive Order 9981. It ‘officially’ ended racial segregation by requiring equality of treatment and opportunity in the United States Armed Forces. In addition to numerous other awards, 1st Lt Leahr along with many other Tuskegee Airmen was awarded ‘collectively’ the Congressional Gold Medal on 29 March 2007, by then, President George Walker Bush. During World War II, 2nd Lt Leahr flew over 130 long-distance combat missions; primarily while based at Ramitelli, Italy under the leadership of Lt Col Benjamin O. Davis, Jr. Sadly, 1st Lt John H. Leahr passed away on 27 March 2015, at the age 94. His 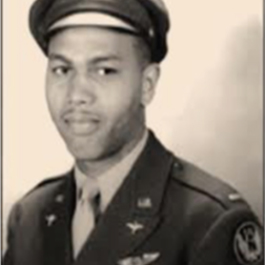