Doris Miller, served in the U.S. Navy as a Mess Attendant Third Class, which was one of the few ratings open to Black sailors at that time. Miller was aboard the West Virginia in Hawaii when Japan attacked Pearl Harbor on December 7, 1941. His courage and "Can do mentality" with a heart of warrior, Doris Miller shot down Japanese aircraft and was able to help save several of injured sailors through fire and smoke and a sea of blood and water. President Roosevelt approved him for the Navy Cross, The third-highest combat award in the Navy. On May 27, 1942, Miller was personally awarded his medal by Admiral Chester W. Nimitz, Commander in Chief, Pacific Fleet, aboard the aircraft carrier USS Enterprise in Pearl Harbor. On November 24, 1943 Doris Miller was presumed dead when the Liscome Bay was struck by a Japanese submarine I-175. There were 272 survivors from the crew of over 900 men. The U.S. Navy honored Miller in 1973, when it named a Knox-class frigate, FF-1091, in his honor. The USS Miller was eventually decommissioned on October 15, 1991. January 20, 2020 the Navy announced that one of their newest Gerald R. Ford-class aircraft carriers would be named the USS Doris Miller. The carrier will be launched in February 2028. Thank you for your heroism and service. 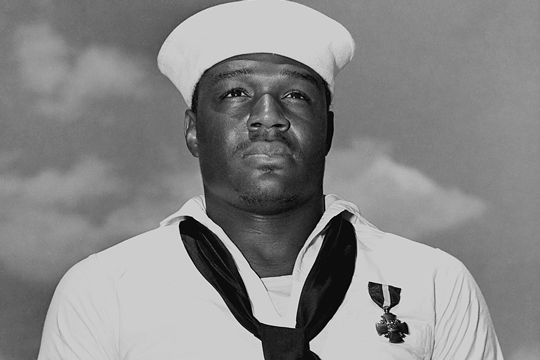