Jeremy Smith joined the marines in 2003. He served in three combat tours in Iraq as a vehicle commander in 1st Light Armored Reconnaissance where he achieved the rank of Sergeant. He got out of the Active Duty Marines and joined the Lone Star Battalion active duty reserve unit out of Houston, during which time he was promoted to Staff Sergeant. In January 2011 his reserve unit deployed to Afghanistan, where his platoon was detached from the Lone Star Battalion and attached to the Marine 2nd Recon fighting in Sangin Valley in the Helmand Province. Jeremy was killed April 06, 2011, in a friendly fire incident by a Hell Fire Missile fired from a Predator Drone. Jeremy was awarded two Navy Achievement Medals, one with valor, during his service in Iraq; and, he was awarded a Purple Heart and Bronze Star with valor for his actions in Afghanistan. 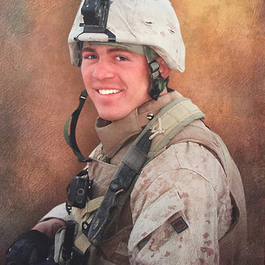