Raymond W. Gill, US Navy Born in 1923 in Warrenton, Virginia, he was drafted in the US Navy in 1944. Raymond completed four weeks basic training at Camp Peary, Virginia, near Williamsburg. He served on the USS Washington, a troop transport, the USS Kadashan Bay, and the USS Cowpens CVL-25 as a Seaman First Class-Gunner. Raymond was honorably discharged in May 1946 and returned to live in Warrenton until his passing in 1998. He was authorized to wear the American Area medal, World War II Victory medal, Asiatic-Pacific medal, the Phillipine Liberation medal, and the Navy Unit Commendation ribbon. His service inspired me, Raymond, Jr., to enlist in the US Navy and serve from 1966 to 1972. 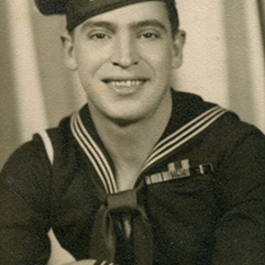