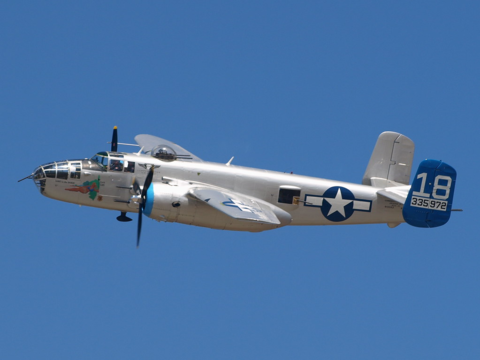 The Airbase Arizona Flying Museum will conduct a historic warbird flyover of the Barrett-Jackson Car Auction at Westworld in Scottsdale, Sunday, March 21. The approximate overhead time is 3 pm.

The two-plane fly-past is led by the B-25 Mitchell medium bomber 'Maid in the Shade' which flew combat missions in the Mediterranean in 1944-45, and the C-47 Skytrain ‘Old Number 30’ which participated in the invasion of Italy in 1943 and top secret OSS missions including rescue of downed aviators in the Balkans in 1944-45. Public appearances such as this by the aircraft honor the heroic crews who went to hell and back to save the world in World War II, and who’s legacy endure today as thousands of young military men and women continue to serve their country in important missions around the world.

Both aircraft will launch from historic Falcon Field in Mesa at approximately 2:45 pm to form up and head west over Westworld in Scottsdale and then return to their home base at the Airbase Arizona Flying Museum at Falcon Field.

The public is invited to view the flyover from the ground while observing current public health safety precautions and are invited to post photos on social media (Facebook CAF Airbase Arizona or Twitter @AZCAF).

The Airbase Arizona Flying Museum is a unit of the Commemorative Air Force which is headquartered in Dallas, TX and has over 80 worldwide units with the mission to educate the public with inspiring historic exhibits and honor those who served. Airbase Arizona has operated from Mesa, Arizona for over 40 years. Our museum, national tour program and living history flight program educate young and old about the sacrifices and service of ordinary Americans who stepped up to defend Democracy. Its museum is open to the public Wednesday through Saturday 10 am to 4 pm. Admission may be purchased online www.azcaf.org

MEDIA COVERAGE INVITED -- contact rides@azcaf.org for access to aircraft startup which is expected to begin with preflight routines at noon March 21.