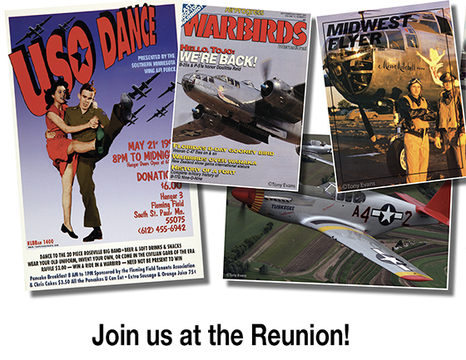 Over five years in the making, the much anticipated, limited edition, hardcover book, “I See No Problem” recounting the early history of the Southern Minnesota Wing of the Commemorative Air Force. Chartered on July 3. 1971 as Charter number 2, number 1 being Headquarters in Harlingen, Texas, they grew from an idea to a large, functioning organization. Together they grew, experiencing the growing pains of any large organization. The story is told with many hundreds of mostly previously unpublished photos covering Wing history and Midwest Warbird operations from the 50's to today. Detailed histories of the aircraft of the time period including the Red Tail Mustang and it's restoration. Miss Mitchell's story is covered from her neglected twelve year slumber, through previous owners, and her eventual restoration we enjoy today. Our contributions to the national organization with two aircraft now in other Wings from our early members. The concept of the National AirPower Tour originated in St. Paul, 1978.

To reserve your Copy: Cash, check or money orders are the acceptable forms of payment, for both the donation and the banquet. Make checks (one check is fine) payable to: American Airpower Heritage Foundation of MN. Send to: Jerry Hahn 180 Stonebridge Rd. St Paul, MN 55118 The S&H fee for mailing the book is $15, unless you want to pick it up at the Banquet on the 28th of August; where you can have it autographed by many original members and other contributors. You may also make arrangements to pick it up at the hangar. To View Video: https://youtu.be/AGf1sAgl5dM

About The Commemorative Air Force: The Commemorative Air Force (CAF) is the worlds largest flying military aircraft museum. For more than 60 years, the CAF has been dedicated to Honoring American Military Aviation through flight, exhibition, education, and remembrance. Fulfilling it's mission, the organizationmaintains airplanes in flying condition, taking the airplanes to the people to experience first hand the sight and sound of the aircraft in flight.

The CAF is a non-profit educational association with more than 11,000 members and a fleet of 165 vintage aircraft distributed throughout America. The Minnesota Wing is celebrating 50 years as the oldest Wing in the CAF. For more information visit: www.CommemorativeAirForce.org - www.cafmn.org.

*Cash, check or money orders are the acceptable forms of payment, for both the donations and the banquet. Make checks ( one check is fine) payable to: American Airpower Heritage Foundation of MN.