A-26 Invader - Returned to flight November 1

The CAF’s A-26 Invader Lil Twister

Nov 1, 2020, Guthrie, Oklahoma-Update, the third A-26 in the CAF inventory returned to flight on November 1, 2020 with two flights out of Guthrie Regional Airport in Oklahoma. The first flight duration was approximately 11 minutes with a few minor squawks. The second flight later in the afternoon was approximately one hour in duration. Mark Novak was the Pilot in Command during the flight.

For more than 21 years volunteers have been working to restore this A-26 Invader in order to return the aircraft to flight. Although many obsticles, including being hit by a tornado, delayed the project, volunteers persisted. Congratulations to the Sierra Hotel A-26 Sponsor Group for a flight 21 years in the making.

A-26 Invaders did not enter military service until later in World War II but have the unique prestige of serving in three combat wars. Invaders were utilized in World War II, the Korean War and the Vietnam War. The aircraft is also well known for its speed and use in night missions. The CAF has three A-26s in the fleet. Hopefully we will be able to unite all three Invaders at some point in 2021.

Check out the video here : 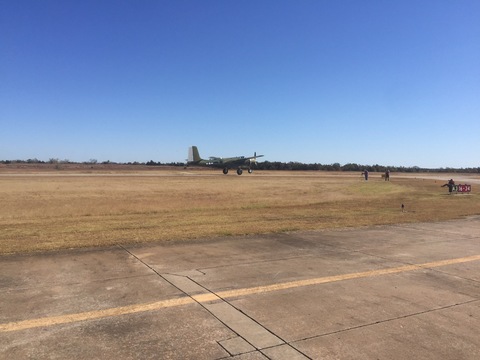 The picture is from the first flight, just after rotation and the video clip is from the second flight. Thanks to CAF member Kurt Konrath for providing photo and videos.