WASHINGTON, D.C., August 2, 2020 – To commemorate the 75th anniversary of the end of World War II, aerial tributes in Hawaii and Washington D.C. will take place in August and September. After lengthy discussions and coordination with federal and local officials, the 75th WWII Commemoration Executive Committee has made modifications to planned events in Oahu and the Washington D.C./Northern Virginia area to address health protocols established by state, county, and local officials as they pertain to public gatherings.

“Commemoration events are in place to pay tribute and thank our veterans of World War II, the Greatest Generation, for their service and sacrifice on behalf of the United States,” said Mike Carr, President and CEO of the Battleship Missouri Memorial. “We have worked very hard to ensure this important anniversary would not go unnoticed and look forward to recognizing those who fought for our ultimate freedom. A special evening is planned on Pier Foxtrot 5, where the USS Missouri is berthed, on September 1, honoring our guests of honor. At 9:02 the next morning, the official 75th Commemoration Ceremony will take place on board the ship — where dignitaries from 10 nations gathered in 1945 to sign the Instrument of Surrender, formally ending World War II.” 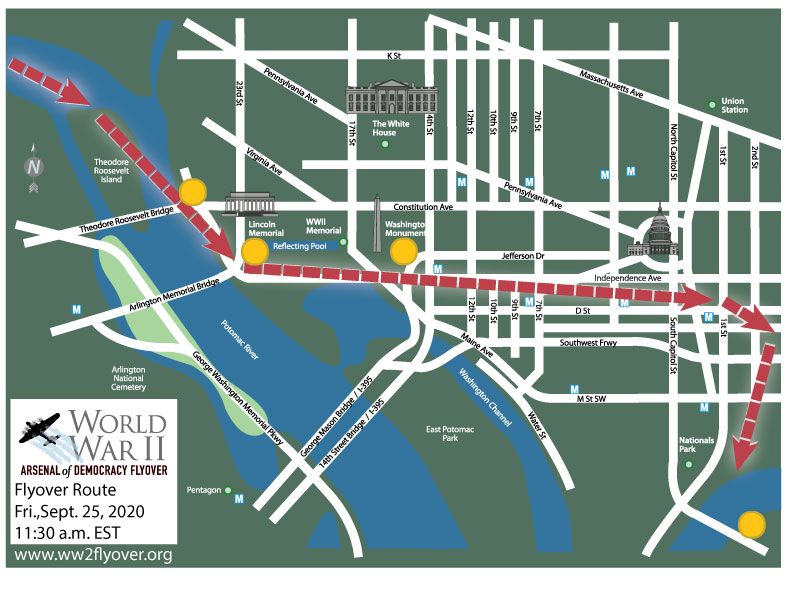 “The 75th anniversary of the end of World War II is a historic milestone and it is important that we recognize the service and sacrifice of our heroes, from the battlefield to the home front. After a tremendous amount of thoughtful planning, we will be able to continue with our rescheduled VE-Day aerial tribute of World War II aircraft over our nation’s capital. Recent flyovers around the country have uplifted spirits and we aim to do the same while honoring our Greatest Generation. Rest assured that the health and safety of our participants and spectators, especially our World War II veterans, is of utmost importance as we continue working to put on this memorable event,” said Pete Bunce, President and CEO of the General Aviation Manufactures Association (GAMA), and Arsenal of Democracy Executive Committee member.

The 75th Anniversary of World War II Commemoration Act was signed into law last year to establish a commemorative program to honor World War II veterans, highlight the service of those who served on the home front during the war, recognize the contributions of U.S. allies, remember the horrors of the Holocaust, and educate the public about the history of these events. The flyover events in Hawaii and Washington D.C. were established as part of the commemorative program. Originally, the Washington D.C. flyover was to take place on May 8, in conjunction with VE-Day (Victory in Europe Day) 75-year anniversary events but was rescheduled due to the COVID-19 pandemic. The Hawaii events are to coincide with the 75th anniversary of the Japanese surrender (VJ-Day) on board the U.S.S. Missouri. The window to honor these commitments for the 75th anniversary of the end of World War II is closing and those that this special commemoration is meant for are getting older in age. Recent flyovers during the pandemic have been done in a responsible and safe manner and the planned aerial tributes of World War II warbirds in Hawaii and Washington D.C. aim to do the same.

Best Places to Watch the Flyover:

• Along the National Mall • Marine Corps Memorial (Virginia side)

• Anacostia Park • In a boat in the Potomac River

Planning committees for both events are working closely with federal and local government officials, aircraft operators, and volunteers to find the best and safest ways to carry out these tributes. With safety in mind and following the guidance of health officials, the Arsenal of Democracy Victory Gala in Washington D.C. that was scheduled for the evening before the flyover, will not take place. Gatherings of air and ground crews as well as support volunteers at the staging bases will be closely monitored and limited, and participating aircraft will not be available for public viewing prior to the events.

The commemoration events will begin in Honolulu on August 29 with educational programs and tributes to honor our veterans. A dinner will be held on September 1, followed, the next day with a public ceremony to be held at the Battleship Missouri Memorial. The events will require tickets to control the number of people in attendance. The public is encouraged to visit 75thwwiiCommemoration.org for the latest information and tickets.

The Arsenal of Democracy, Washington D.C. Victory Capital flyover will take place on Friday, September 25, and include over 60 aircraft from across the U.S. and Canada that will fly down the Potomac River across the National Mall in a historic sequence representing the significant battles of World War II. The aircraft will be over the National Mall at approximately 11:30 AM EST, and the entire flyover will last approximately one hour. Spectators will be able to view the aircraft from several points along the route and watch a live streamed broadcast, complete with narration. Look for additional information on the September 25 flyover at WW2Flyover.org.

The Event Organizers of the Arsenal of Democracy are General Aviation Manufacturers Association (GAMA), National Air Traffic Controllers Association (NATCA), International Council of Airshows (ICAS) and Commemorative Air Force (CAF). Through the sponsorship of the CAF, a 501(c)(3) non-profit organization, all donations are tax deductible to the extent allowed by law. Please consult your tax advisor. Any information provided will be handled according to this privacy policy. Tax ID 74-1484491.