WASHINGTON, D.C. – The organizers of the Arsenal of Democracy Flyover were saddened to learn that Thomas R. “Bob” Vaucher died on Sunday, February 7, at his home in New Jersey at the age of 102.

In September 2020, Vaucher served as the Honorary Air Boss for the Arsenal of Democracy (AOD) Flyover in Washington, D.C. and participated in the planning and execution of this national tribute to the 75th anniversary of WWII. Vaucher enthusiastically flew in the B-29 Superfortress named “DOC” as part of his Honorary Air Boss duties.

“Bob Vaucher was an amazing American hero who selflessly served our nation with distinction and honor during World War II. From accepting, then piloting, the first delivery of a Boeing B-29 Superfortress for the U.S. Army Air Forces, to conducting bombing missions against Japan from forward operating locations in China, to leading over 500 B-29s and more than 100 escorting P-51s in one of the largest bombing raids in the Pacific Theater, Bob played a powerful leadership role throughout World War II,” said Pete Bunce, President and CEO of the General Aviation Manufactures Association (GAMA), and Arsenal of Democracy Executive Committee member. “We were so deeply honored to have Bob relate combat stories to our assembled aircrews at our AOD staging bases this past September. His presence made all the effort that went into this massive endeavor so very worthwhile. We extend our deepest and heartfelt condolences to his family and friends. Lt. Col. Vaucher will forever be remembered as a warrior who so humbly exemplified America’s Greatest Generation.”

“Lieutenant Colonel Vaucher was an American hero who personified the Greatest Generation and all that it stood for,” said John Cudahy, President of the International Council of Air Shows, and Arsenal of Democracy Executive Committee member. “His involvement in our Arsenal of Democracy flyover last year helped to personalize and humanize the great victory that his generation helped achieve more than 75 years ago.”

“Bob Vaucher is a defining example of what it means to be a member of the Greatest Generation. ‘Honor’ is one of the core missions of The Commemorative Air Force. Our participation in AOD was intended to pay tribute to the men and women who sacrificed and fought vigilantly at home and abroad during WWII," said Hank Coates, President of the Commemorative Air Force (CAF), and Arsenal of Democracy Executive Committee member. “Bob Vaucher was a humble and fun ambassador of his generation. A pleasure to be around and an inspiration for all that he met. Myself and all of the supporters of AOD are truly blessed to have shared some great stories, lifted a glass to honor all those who have gone before, and those that will go in the coming years. Farewell and following seas Bob!”

Flyover Air Boss Mike Ginter remembered Bob as a “pilots’ pilot” and enthusiastic participant in flyover preparations. “Bob enjoyed meeting with over 150 warbird pilots and crews during the flyover activities at Culpeper and Manassas airports in Virginia and he will be sorely missed and fondly remembered by all who know him”, Ginter said.

The following video was produced by the Arsenal of Democracy, which honors Lt. Col. Vaucher on Veterans Day.

The following pictures were taken of Lt. Col. Vaucher during Arsenal of Democracy events in September 2020.( All photos courtesy of David Tulis, AOPA) 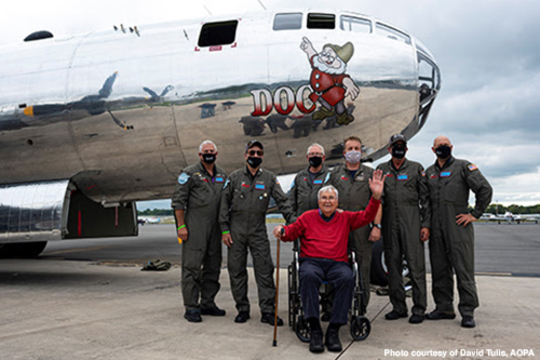