**PEACHTREE CITY, GA. (May 8, 2019) – ** More than 75 World War II veterans enjoyed the sights and sounds of the 16th Annual World War II Heritage Days at the Commemorative Air Force (CAF) Dixie Wing Warbird Museum in Peachtree City, Ga., April 27-28. A record crowd exceeding 5,000 helped greet and honor the veterans and enjoy the aircraft, vehicles and activities throughout the weekend, which was dedicated to the 75th anniversary of the D-Day invasion in Europe. 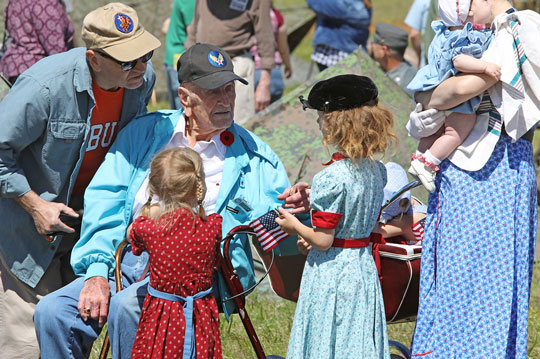 Caption: Veteran Clarence "Pappy" Boynton of Peachtree City, Ga., enjoys talking to WWII Heritage Days participants about his Army Air Corps time in WWII. Record crowds enjoyed the weekend filled with aircraft and activities. {Photo by John Willhoff) * Highlights of the event included the appearance of three C-47 transport aircraft that actually were used in the D-Day invasion 75 years ago, special jumps by the U.S. Army Golden Knights, and a WWII reenactment display by the Liberty Jump Team from a C-47, much as it would have looked 75 years ago. Volunteer reenactors staged mock European battles for the crowd to watch, and rides were available on the Dixie Wing’s vintage warbirds, the C-47 *That’s All, Brother; and a helicopter from the Army Aviation Historical Foundation in Hampton.

“It was truly heartwarming to see children and guests of all ages take time to talk to these WWII veterans,” said Wing Leader Jim Buckley. “Their numbers are dwindling every day, but the veterans at WWII Heritage Days were happy to share their stories and receive thanks for their service. The mission of WWII Heritage Days is to celebrate the 1940s, salute the Greatest Generation and inspire all ages to preserve the legacy of America’s veterans.” 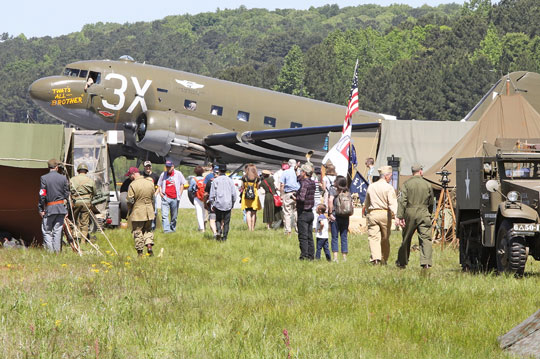 Restored WWII C-47 transport looks over Camp Dixie reenactors and guests at WWII Heritage Days at Atlanta Regional Airport - Falcon Field. This was the 16th annual event presented by the Commemorative Air Force Dixie Wing. (Photo by John Willhoff) “The crowd enjoyed the gathering of C-47 transport planes, including *That’s All, Brother, *which will travel to Europe later in May to participate in the 75th Anniversary of D-Day,” said D-Day Squadron spokesperson Mo Aguiari. “People had a chance to see and ride in this historic C-47 so carefully restored by the CAF, just before it flies over the Atlantic for the momentous commemoration in June.”

The Saturday night Hangar Dance, which recreated the feel of the 1940s, was sold out for the sixth consecutive year. The CAF brought an inflatable dome theater that played a short movie about the famed Tuskegee Airmen, and American Legion Post 50 provided hot sandwiches and the ever-popular Spam-burgers.

About the CAF Dixie Wing Warbird Museum The CAF Dixie Wing, based in Peachtree City, Ga., was founded in 1987. The Wing, one of the largest units of the Commemorative Air Force, maintains and flies seven WWII aircraft including a P-51 Mustang, an FG-1D Corsair and rare types such as the SBD Dauntless dive bomber and P-63A Kingcobra. The unit, composed of 300 volunteers, is a non-profit, tax-exempt organization that relies on contributions of time and funds to carry out the mission of the CAF. For more information, go to www.dixiewing.org.