This year’s National Championship Air Races were held in Reno, Nevada on Sept 12-15, 2019. For those who were unable to attend, here is a quick recap of the event.

Mother Nature cooperated nicely, providing very cool mornings, pleasant early afternoon temperatures and sunny late afternoons. The crowds seemed larger than last year which was most apparent in the grandstands, that were about 80% filled.

The Commemorative Air Force Headquarters attended this year, along the traditional CAF units who attend, High Sierra Squadron and CAF Southern California Wing. The CAF’s sponsorship allowed for additional space to entertain supporters as well as a tent for membership recruiting. When asked about the crowd, CAF Vice President of Marketing Leah Block said, “We planned to go and introduce a ton of new people to our organization, and what we learned was… they already knew. I was amazed at how many people there were already CAF members. Still, it was really great to see so many CAF hats and t-shirts on the grounds and catch up with several West Coast CAF members.” 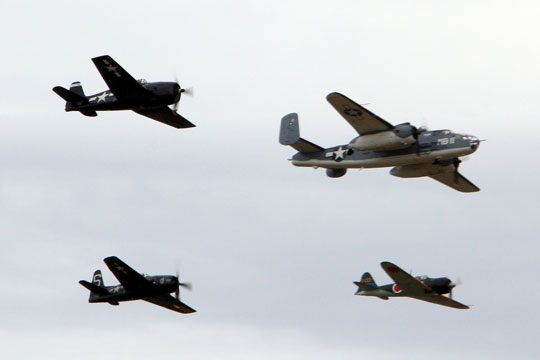 The Reno Air Races officials did an outstanding job again this year. The many hours devoted to preparation, practice, and certification resulted in 124 planes and 134 pilots being signed off and able to compete this year.

Here are some of the highlights racing results for 2019:

The ever popular big guys Unlimited Class was dominated by the Hawker Sea Furies (mainly from the House of Sanders) and the North American P-51 Mustang. The much-deserved Unlimited Gold came home with Dennis Sanders in Dreadnought. This beautiful airplane is powered by a Pratt & Whitney 4360. Winning speed was 403.274 MPH. The ability of this pilot and machine clearly dominated the Gold Race. The second place finisher came home with Joel Swager in Hawker Sea Fury 924 from the House Of Sanders. This amazing aircraft is about 98% stock including the Bristol Centuris sleeve valve engine.

The ever getting faster Sport Class featured birds able to knock on the 400 MPH door a few go through it. This year, again, had Andrew Findlay come home with the Gold at 390.744 MPH. The field was left far behind this skilled pilot and aircraft team. The second place came home with well-known pilot Kevin Eldridge at 358.740 MPH.

The Biplane Class shows off several skills, including construction, maintenance, and piloting in race conditions. The 2019 gold came home with Andrew Buehler in a modified Mong Sport at 227.755 MPH. The Tom Aberle Memorial Gold Race was cancelled due to excessive wind speeds and gusts. The 2nd place was awarded to Phillip Ensley in Magic a Pitts S-1S.

The Formula One Gold for 2019 came home with Lowell Slatter in Fraed Naught at 243.442 MPH. The lucky second place came home with Justin Meaders in Limitess at 237.010 MPH. If you get a chance, do sit in a formula one bird and close the canopy. I have been able to sit in a couple birds, and come home with the sensation of putting on a tight fitting shoe. Very limited space is an understatement! This class always has wing tip to wing tip intense racing and Pylon passing occurs frequently.

Here are some of the Trophy Winners from the National Aviation Heritage Invitational (NAHI):

The 2019 Grand champion Neil A. Armstrong trophy was awarded to the 1931 WACO QCF owned by Chris Galloway, this stunner left me speechless.

The Paul E. Garber trophy for classic aircraft was awarded to the 1952 Cessena 195, with factory blue accents on polished metal, words barely describe this beauty owned by Bela Havasreti.

The Orville & Wilbur Wright trophy for antique aircraft presented to the 1936 Stinson SR-8 owned by David Lunsford, the finish, fit, leather interior, immaculate paint, and finish certainly gets your attention. The interior reminded me of a period Rolls Royce.

The Henry “Hap” Arnold trophy for Military Aircraft was awarded to the 1945 Piper L4-J owned by Ken Schmitt.

The Herb Kelleher trophy for large aircraft awarded to the 1939 Grumman Goose owned by Gary Filizttii. In my opinion this aircraft could be the very best example in existence.

The trophy for Contemporary Aircraft was awarded to the 1962 Meyers 200 owned by Bruce Mayes.

The People’s Choice award for Airplane Of the Year went to the duel winner 1931 WACO QCF.

Aircraft in the biplane class race at the 2019 Reno Air Races. Photo by Joe Gonzalez

The National Aviation Heritage Invitational (NAHI) was started in 1998, with the goal to honor the historic preservation efforts of these rare and significant pieces of aviation history. All aircraft entered are judged by a five expert panel including representatives of the National Air and Space Museum.

The National Air Races introduced and new attraction this year- STOL Drag Racing. This first year demonstration provided a combination of heart pounding head-to-head racing with some major big horsepower. These bush pilot looking, high wing aircraft include tundra style wheels and tires. With a short take-off the pilot gets airborne very quickly, makes a very short landing roll, completely stops and make a quick turn about, again repeats the short take off and landing, while being timed.

Reno for 2019 will be long remembered. Save the date for next year, September 16-20, 2020 and attending the 57th National Championship Air Races. Learn more at https://airrace.org/. 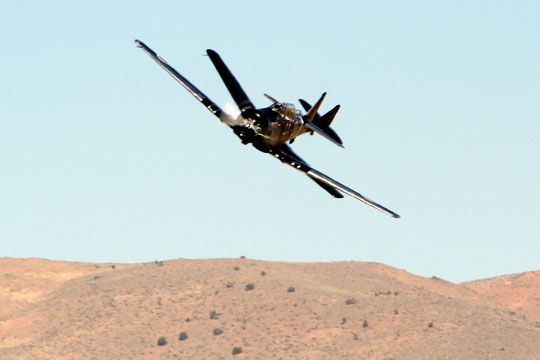