November 16, 2020, Peachtree City, GA– On Saturday, November 14, 2020, the Commemorative Air Force (CAF) Dixie Wing held a dedication ceremony for their assigned P-63 Kingcobra. The aircraft was named "Miss Betty" in honor of long time Wing member Betty Bishop. During World War II Bishop worked for Bell Aircraft in Niagara Falls building P-39 Airacobras and P-63 Kingcobras. The women who worked in factories on the homefront while many male soldiers were fighting overseas are known as "Rosie the Riveter."

It was discovered that Bishop had actually worked on the exact P-63 aircraft that is now operated by the Dixie Wing. Bishop, who lives in Florida, traveled to the Dixie Wing in Peachtree City, Georgia for the dedication ceremony. At the ceremony a prominent inscription "Miss Betty" was revealed on the nose of the aircraft. Leadership thanked Bishop for her service to her country as well as her dedication to supporting the Commemorative Air Force Dixie Wing.

About the CAF Dixie Wing Warbird Museum The CAF Dixie Wing, based in Peachtree City, Georgia, was founded in 1987. The Wing, one of the largest units of the Commemorative Air Force, maintains and flies seven World War II aircraft including a P-51 Mustang, an FG-1D Corsair and rare types such as the SBD Dauntless dive bomber and P-63A Kingcobra. The Dixie Wing is part of the Commemorative Air Force, a non-profit, tax exempt organization that relies on contributions of time and funds to carry out it’s mission. For more information, go to www.dixiewing.org. 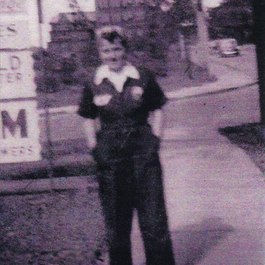 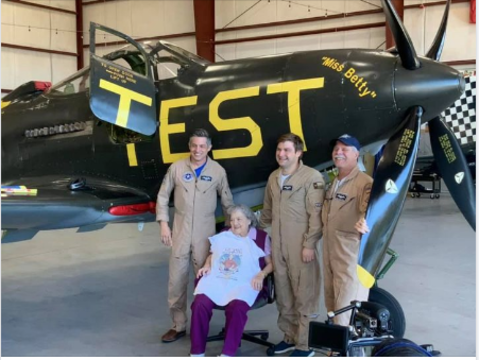 CAF Pilots stand with Rosie the Riveter - Betty Bishop - as she is presented with the naming of the P-63 Miss Betty, named in her honor. (left to right) Mark Todd, Betty Bishop, Taylor Stevenson, and Craig Hutain.