PEACHTREE CITY, Ga. (Jan. 14, 2019) – Two national educational programs from the Commemorative Air Force (CAF) will enhance the lineup of events scheduled for the 16th annual WWII Heritage Days, April 27-28, 2019, at the Dixie Wing Warbird Museum at Atlanta Regional Airport-Falcon Field in Peachtree City, Ga. The “Rise Above” programs, based in Dallas, Texas, will feature the history of famed Tuskegee Airmen and the Women Airforce Service Pilot (WASP) organization. Displays will include a unique video dome and historic aircraft. The Tuskegee Airmen was the first video program for the dome, followed by the latest video honoring the WASP program. “Rise Above” now includes two traveling exhibits that promote the concept of rising above adversity.

WASP began as an experimental program open to women with pilot’s licenses. Of the 25,000 who applied, only 1,830 were accepted into the program and 1,074 graduated. WASP received myriad assignments: flying new, untested planes from factories to airbases; towing targets for live anti-aircraft training; test-piloting newly repaired and experimental aircraft; and transporting vital equipment and personnel. The women also served as Certified Flight Instructors, training female and male pilots. They logged more than 60 million miles of operational flights and delivered every type of military aircraft. WASP was the only unit that flew every type of aircraft in the Army's arsenal, from bombers to fighters.

By December 1944, 38 WASP pilots had made the ultimate sacrifice for their country. Fallen WASP were not given military honors and, as civilian contractors, did not receive veteran status or any benefits, including death benefits. When disbanded in December 1944, the U.S. Army instructed them to not speak about their flying service. The government records were sealed for more than 30 years. The WASP was “the Forgotten Airforce”. When the records were unsealed in 1977, they finally received veteran status, and recognition in the form of a Congressional Gold Medal in 2009.

“Today, the CAF honors these pilots with its WASP Squadron, providing outreach education and operating an AT-6 that was part of the 1943-44 training,” said Dixie Wing Education Officer Rick Ector. “The plane, which will be on display for WWII Heritage Days, was flown by three identified WASP at that time and has flown seven WASP veterans since 2016. It is fondly called Nella, after the WASP mascot, Fifinella, a female gremlin character created by Walt Disney.”

The Tuskegee Airmen are best known for their extraordinary efforts in the air war of World War II, and for challenging the stereotypes that had kept black Americans from serving as pilots in the U.S. Armed Forces. The amazing story of the Tuskegee Airmen, America’s first black military pilots and their support personnel, will be told in a new CAF attraction, a portable video dome.

In 1940, under pressure from activists, the press and political groups, and responding to the campaign promises of President Franklin D. Roosevelt, the U.S. Army Air Corps reversed its position and began to accept black applicants to their flight programs, and the next year created a segregated unit for these new aspiring pilots. The program included all the pilots and enlisted support personnel who served the all-black unit, totaling 14,000 men and women. Their ability to triumph over adversity and go down in history as extremely adept pilots proved their worth and continues to inspire future generations to rise above their own obstacles to achieve success. “WWII Heritage Days is an immersion experience,” said Ector. “The sights and sounds will inspire people of all ages and walks of life to connect with the legacy of The Greatest Generation. The Commemorative Air Force (CAF) Dixie Wing will recreate the 1940s era with the music of Glenn Miller at a Hangar Dance and displays of historic aircraft, military vehicles, antique cars and vintage fashion. WWII veterans will be honored throughout the weekend.”

The festivities at the CAF Dixie Wing Warbird Museum constitute the largest annual 1940s theme event in Georgia. Throughout the weekend, more than 500 volunteers will conduct special events such as Allied and Axis troops in reenactment battles, 1940s music shows, veteran and historian presentations, education displays and activities for children. On Saturday evening, the romance and glamor of the Big Band Era will return during “Keep ‘em Flying”, a 1940s-theme hangar dance featuring a live 20-piece swing band. 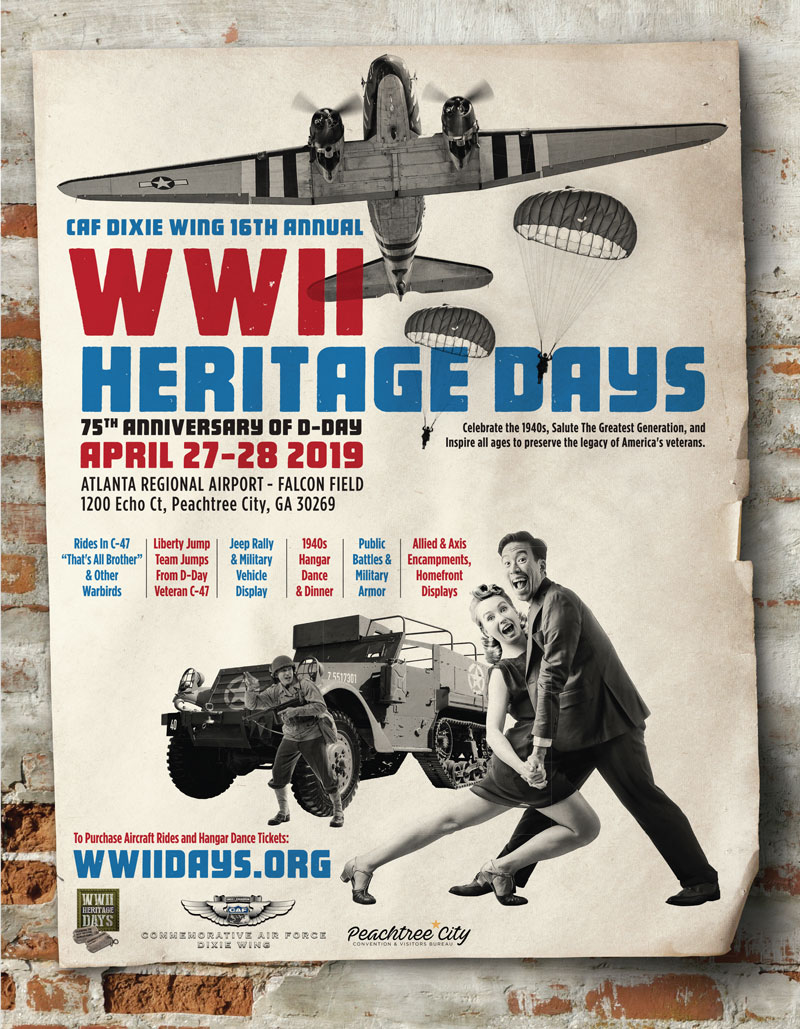 About the Commemorative Air Force The Commemorative Air Force (CAF) is the world’s largest flying military aircraft museum. For more than 60 years, the CAF has been dedicated to honoring American Military Aviation through flight, exhibitions, education and remembrance. Fulfilling its mission, the organization maintains airplanes in flying condition, taking the aircraft to communities across America to experience first-hand the sight and sound of the aircraft in flight. The CAF is a non-profit educational association with more than 11,000 members and a fleet of 174 vintage military aircraft distributed throughout the U.S. For more information visit www.CommemorativeAirForce.org.

About the CAF Dixie Wing Warbird Museum The CAF Dixie Wing, based in Peachtree City, Ga., was founded in 1987. One of largest units of the Commemorative Air Force, the unit maintains and flies seven WWII aircraft including a P-51 Mustang, FG-1D Corsair and rare types such as the SBD Dauntless dive bomber and P-63A Kingcobra. The unit, composed of 300 volunteers, is a non-profit, tax-exempt organization. Dixie Wing Website