The memorable bright red Oracle Challenger III piloted by Sean D. Tucker flew his last airshow performance at CAF Wings Over Houston on October 20, 2019. Sean D. Tucker has flown more than 1,600 performances at upwards of 575 air shows in front of over 155 million fans. He has been thrilling air show fans since 1976. He is known best for his heart pounding aerobatics and signature ribbon cutting act with Team Oracle.

Team Oracle announced earlier this year that Jessie Panzer, the only civilian female formation airshow pilot in the United States would join Tucker in the act. Also stating, “While the team welcomes Panzer, it prepares to say farewell to the one-of-a-kind dream machine, the Oracle Challenger III. At the end of the 2019 season, the Oracle Challenger III is headed to a place of honor in Smithsonian’s National Air and Space Museum.” 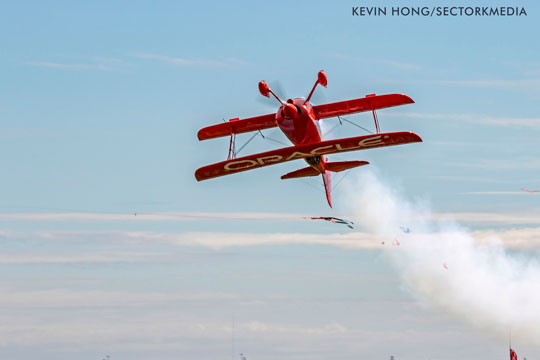 Tucker is currently involved in several organizations including the Bob Hoover Academy and is the Co-Chairman of EAA’s Young Eagles Program. He has flown the CAF Wings Over Houston Airshow many times and in 2016 was awarded the Lloyd P. Nolen Lifetime Achievement Award by the Airshow Executive Board.

You can read more about the next moves for Team Oracle on their website at https://www.oracle.com/corporate/teamoracle/

In a Facebook post on October 20, 2019 Tucker writes "October 20, 2019 marks the last time the Oracle Challenger III will enchant, thrill, and inspire audiences at airshows. To see this beautiful biplane after today, we'll have to visit it's new home, where it will hang inverted, at the National Air & Space Smithsonian, scheudled to open in 2022. #yeahbaby #weallfly #livewithpassion Smithsonian"