Central Texas FLYOVERS FOR THE FOURTH

San Marcos, Texas (June 17, 2021)- On July 3 and July 4, vintage military aircraft of the Central Texas Wing, a unit of the Commemorative Air Force, will perform flyovers of neighborhoods in Austin to help celebrate Independence Day.

Flyovers at sporting events and airshows feature military aircraft flying low and loud. Everyone looks up. They serve as reminders of sacrifices made and lessons hard won by our men and women in the armed forces. They inspire a higher calling - that of patriotism and love of country.

This Independence Day, people can contribute to make a patriotic flight over their San Antonio, Austin, or Central Texas neighborhood, business, or event as part of your Fourth of July. For a $500 donation, four to six vintage aircraft will fly over your location at 1000 feet above ground level in precise formation. The aircraft plan to over-fly up to fifty neighborhoods during the July 4th weekend.

Neighborhoods can put a “pin on the map” with as low as a $500 donation to the organization. The precise route of flight for the formation and the deadline to sign up is July 1. The event will be live streamed via Facebook and YouTube with audio and video from both the ground and the aircraft during the flight. Funds from the event will be used to support the continued preservation and restoration of historic aircraft owned by the Commemorative Air Force (CAF) and operated by the Central Texas WIng of the CAF.

For more information, or to sign up, visit https://flyover.centraltexaswing.org.

About the Central Texas Wing: The Central Texas Wing is part of the Commemorative Air Force (CAF), an educational non-profit organization founded in 1957. The CAF has more than 11,000 members and 170 vintage military aircraft located around the nation. These aircraft comprise the world’s largest flying museum and are operated for the education and enjoyment of present and future generations. The Central Texas Wing was established in March 1974. The group has 150 members who volunteer to maintain six World War II-era aircraft in flying condition, including one of the most historic aircraft still flying, the C-47 That’s All, Brother. The Wing is located in a World War II hangar at the San Marcos Regional Airport. Wing aircraft provide history flights, perform flyovers, and attend airshows around the country. A Casino Night, Golf Tournament, and Veteran's Day Dinner Dance are three major fundraisers held annually to support the restoration and maintenance of our historic aircraft. The Wing is open M-W-F-Sat from 9 a.m. to 4 p.m. for tours to school groups, civic and military organizations, ROTC cadets, scout organizations, and the general public. Admission is free. More information can be found at www.centraltexaswing.org or on Facebook at facebook.com/centraltexaswing. 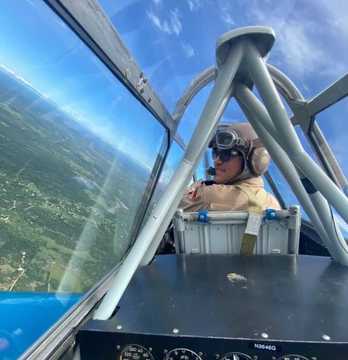