On September 2, 1945, Imperial Japan formally surrendered to the allies aboard the USS *Missouri *in Tokyo Bay. This year we honor and commemorate the end of World War II, 75 years later.

We are particularly fortunate to still have with us a few of the men and women who contributed to that victory three-quarters of a century ago. Most Americans today were born after World War II, but benefit from the commitment, sacrifice, and ultimate victory secured by the Greatest Generation. Some of us were fortunate to hear their stories firsthand. As time has gone by, generations of Americans have heard fewer stories, and -- in the history books and in the classrooms of some schools -- the narrative of the war has been reduced to a few paragraphs or a day or two of instruction.

Those stories deserve more. All Americans should know that, not so very long ago our way of life, our freedom, our liberty was threatened. Everyone participated…if not in uniform, then working in the factories, building the machines and producing the munitions and supplies that “our boys” used so effectively on hundreds of different battlefields around the world. Those on the homefront also served by going without - rationing - so that our soldiers, sailors, airmen, Marines and Coast Guardsmen would have what they needed to survive and win.

There is a genuine, heartfelt humility among these heroes who, willingly walked into harm’s way to protect and defend this country. If you asked them, most of the World War II veterans would tell you that they were only doing what any other guy would have done.

We must continue to acknowledge and display the deep respect for these heroes and must never forget the ones who never came home. It is our great honor to help tell their stories; to explain how this great country prepared itself for battle and then sent its sons and husbands, its brothers and uncles, to every corner of the planet in the cause of liberty. Over the last several months, many organizations have prepared for this commemoration of the 75th anniversary of the end of World War II. 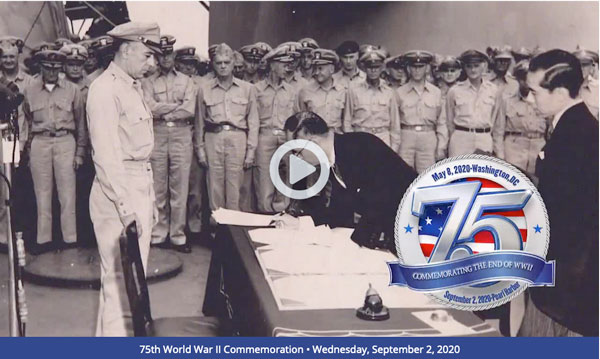 With opening features including historic Legacy of Peace footage as well as live WWII Warbird flyovers, countless ships in Pearl Harbor and a Naval Pass & Review in honor of our WWI veterans, the historic official ceremony taking place on the Fantail of the Battleship Missouri Memorial will begin at 9:02 am (Hawaii Standard Time). It will feature music by the U.S. Pacific Fleet & the U.S. Marines Corps Forces, Pacific Bands; the Parade of Colors; speeches by stakeholders connected to the event, including CAPT Steve Colon, USN (RET), Governor David Ige, State of Hawaii; a video message from General Mark Milley, Chairman of the Joint Chiefs of Staff; guest speaker Admiral Phillip Davidson, Commander, U.S. Indo-Pacific Command; and keynote speaker, Dr. Mark Esper, U.S. Secretary of Defense; and more! We will honor all those who served both in battle and the home front and pay tribute to our Greatest Generation. You can watch virtually at 75thwwiicommemoration.org/live Facebook-live at @75thwwii

The Commemorative Air Force’s (CAF) Inland Empire Wing, will conduct a Victory Flight over several important historic landmarks in Southern California which played a major role in World War II. The Victory Flight hopes to honor the veterans of World War II, including personnel who were held as prisoners of war or listed as missing in action, for their service and sacrifice, to thank and honor the families of these veterans, and to pay tribute to the contributions made on the home front by the people of Southern California during World War II. The flight will go over many of these important landmarks such as the aircraft manufacturing facilities in Santa Monica, the Santa Ana Naval Air Station, and Marine Air Corps station in El Toro. The Pacific Battleship Center: Battleship Iowa is another landmark in the flightpath.

“This is a very big year,” said Bill Prosser, Inland Empire Wing Member “This is truly one of the last opportunities to pay a tribute to those who contributed to the war in person. And sadly, due to the pandemic, we are trying to find very creative ways to do that. If we do not do it now, we will be missing a tremendous opportunity to educate the public about World War II and why it is such a significant part of our history.” The 90-minute flyover begins at Noon. PT at Long Beach Airport at Signature Aviation FBO, and will go over several landmarks to hit the target flying over the USS Iowa at about 12:30 p.m.

14 World War II era aircraft are slated to participate. Aboard some of the aircraft will be veterans, Rosie the Riveters, and Holocaust survivors. https://www.facebook.com/Commemorative-Air-Force-Inland-Empire-Wing-235329619971902

Old Guys and Their Airplanes announces that USAF “Tuskegee Airman” Brigadier General Charles McGee is scheduled to participate in a live broadcast interview, Wednesday, Sept. 2, 2020, at 11:00 a.m., Central Daylight Time. McGee is one of the few surviving members of World War II’s 332nd Fighter Group, a unit of African-American military airmen formed during the era’s culture of unit-segregation by race. In addition to World War II, McGee served in the Korean War and the Vietnam War, accumulating an astounding 409 combat missions. His civilian service is marked by extensive honors including the nation’s highest civilian award, The Congressional Gold Medal. Today, at age 100, he remains an active role model to youth, promoting his mantra of personal success, “Perceive, Prepare, Perform and Persevere.” The interview will be conducted by aviation artist, writer and filmmaker, John Mollison, as part of the award-winning history brand, Old Guys and Their Airplanes (OGTA). The Distinguished Flying Cross Society (DFCS) is sponsoring OGTA’s online, live “Debrief” interviews as part of their commitment to ensuring that the stories of its members’ heroic actions are made available to the general public. South Dakota Public Broadcasting (SDPB) is providing broadcast support, making the interview available at no cost to the public with emphasis on educators and group leaders. To watch the live Sept. 2 interview and learn how to participate in the Q&A opportunity, go to: https://www.sdpb.org/OGTADebrief

Washington, D.C. on Friday, September 25, 2020, as part of the Arsenal of Democracy 75th World War II Victory Commemoration Flyover. Approximately 70 World War II aircraft will take to the sky in historically sequenced warbird formations. These formations will fly over the Washington Mall in two-minute intervals. The formations will represent the War’s major battles concluding with a missing man formation. More than 20 different types of vintage military aircraft are expected to participate in the flyover. Aircraft are being provided by multiple organizations and individuals whose mission is to preserve these historic artifacts in flying condition. Some of the historic aircraft expected to participate include the P-40 Warhawk, P-39 Airacobra, P-38 Lightning, P-51 Mustang, P-47 Thunderbolt, F4U Corsair, B-25 Mitchell, B-17 Flying Fortress, B-29 Superfortress, and many others.