(November 1, 2019, Dallas) - The Commemorative Air Force (CAF) will again hold an annual online giving campaign called “12 Planes of Christmas” located at www.SupportCAF.org. The campaign provides an opportunity to learn more about the CAF’s fleet and help support in the restoration and maintenance of the aircraft. Flying the aircraft is an essential function of the organization and part of its mission: to educate, inspire, and honor through flight. The nearly 60-year-old organization strives to engage people in the history of these aircraft, which played a central role in America’s victory in World War II.

“To learn about military aviation history and to see, touch, and ride in these old warbirds is far superior to just walking through a museum and looking at an airplane but no opportunity to interact with it or to ride in it. Most of the heroes of the greatest generation have passed on, but through the CAF, their legacy of flight lives on,” said Ronald E Deane, CAF event attendee.

The aircraft of the CAF are restored, maintained, flown and exhibited by a dedicated volunteer force, which operate out of 60 different locations across the country. The organization depends on donations to keep them flying.

The campaign and website supportcaf.org launch on Giving Tuesday, December 2, 2019 and will run through January 1, 2020. 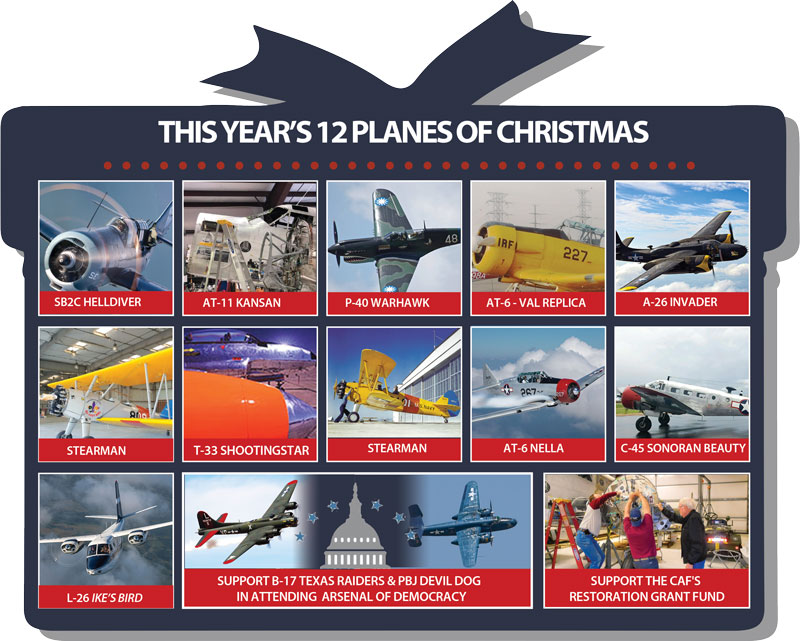 This year, the CAF will feature 12 planes, each with different historical significance and in various stages of restoration; some needing support to become airworthy again. The aircraft featured this year are: SB2C Helldiver, AT-11 Kansan, P-40 Warhawk, AT-6 Texan (Val Replica), A-26 Night Mission, PT-17 Our Lady, T-33 Shooting Star, N2S Kaydet, AT-6 Nella, SNB-5 Sonoran Beauty, and L-26 Ike’s Bird. The twelfth “plane” is a project to support the B-17 Texas Raiders and PBJ Devil Dog in readying the aircraft to participate in Arsenal of Democracy.