HISTORIC AIRCRAFT TO FILL THE SKIES OVER WASHINGTON D.C. COMMEMORATING 75TH ANNIVERSARY OF THE END OF WORLD WAR II

Sept. 9, 2020 (DALLAS)-On Sept. 25, 2020, approximately 60 vintage aircraft will take to the skies over Washington, D.C. to commemorate the 75th anniversary of the end of World War II. The Arsenal of Democracy (AOD) Flyover will feature historically sequenced formations representing the war’s major battles – from the Battle of Britain through the final air assault on Japan.

More than 20 different types of vintage military aircraft are scheduled to fly in formations beginning over the Lincoln Memorial in Washington, D.C. The airshow is scheduled to begin at 11:30 EST with planes flying in two-minute intervals over the skies of the nation’s capital. The commemoration is expected to last approximately 70 minutes and will be live-streamed on the AOD’s Facebook page.

As a principle organizer of this historic event, the Commemorative Air Force (CAF) – the world’s largest flying museum – will send 14 warbirds from units across seven states to participate in the World War II Victory Commemoration Flyover. The CAF aircraft include a range of bombers, fighters and vital transport and support aircraft, all of which played crucial roles in World War II.

Participating CAF aircraft include some of the war’s most iconic warbirds, such as the:

B-29 Superfortress *FIFI*: One of only two B-29 Heavy Bombers still flying.

C-47 *That’s All, Brother*: Led the formation of 800 aircraft from which 13,000 U.S. paratroopers jumped during the D-Day invasion of Normandy.

P-51 Mustang *Tuskegee Airmen*: Long range fighter-bomber made famous by the inspirational stories of the African-American pilots who flew them.

B-17 Flying Fortress *Sentimental Journey*: Flew bombing missions over Europe throughout the war. One of only five B-17s around the world still actively flying.

“The CAF is dedicated to educating, inspiring and honoring through flight and living history experiences,” said Hank Coates, president, Commemorative Air Force. “We’re proud to serve as a principle organizer of the Arsenal of Democracy Flyover to help ensure we recognize and remember the enormous sacrifices of our nation’s heroes.”

Founded in 1957, the Commemorative Air Force has amassed 175 World War II aircraft – the largest collection of vintage military warbirds in the world. Through the work of more than 11,000 volunteers across 83 units, the CAF’s educational outreach programs reach an estimated 20 million Americans each year, providing unique, compelling hands-on access to history. 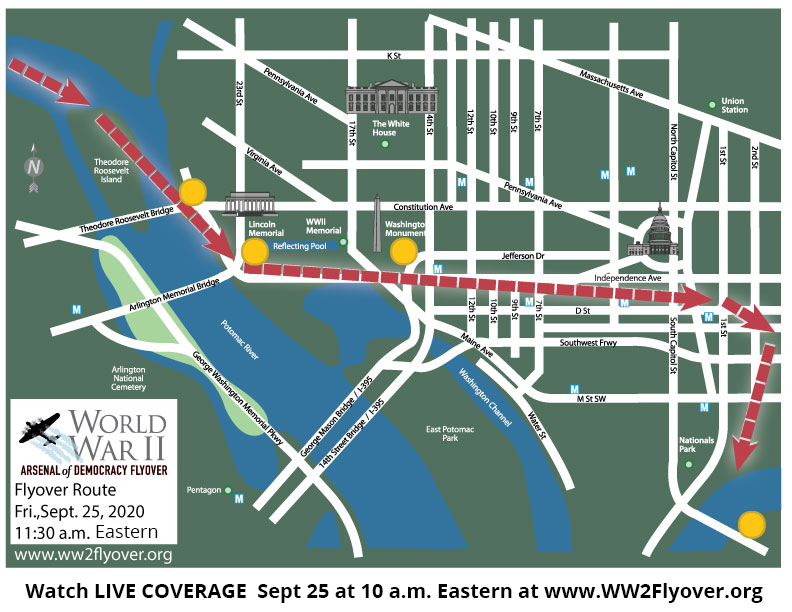