Written by aviation photographer Gary Daniels. Originally posted at https://www.facebook.com/gdaniels57 and reposted on www.CommemorativeAirForce.org with permission.

Hamilton is very familiar with the C-47 having logged many hours in them, including combat time. At 21-years-old, 1st Lt. Hamilton piloted aircraft number 14 of the 20 C-47s that took off late the evening of June 5, 1944, carrying 82nd Airborne Pathfinders to drop them into France behind German lines. Hamilton dropped his Pathfinders around 1:00 a.m. on June 6. The mission of the Pathfinders was to set up electronic homing equipment to help guide the more than 800 C-47 aerial armada that was already crossing the English Channel an hour behind Hamilton’s flight. On those aircraft were 13,000 paratroopers that would drop into the dark of night at the start of the invasion of Europe in the Normandy region of France. 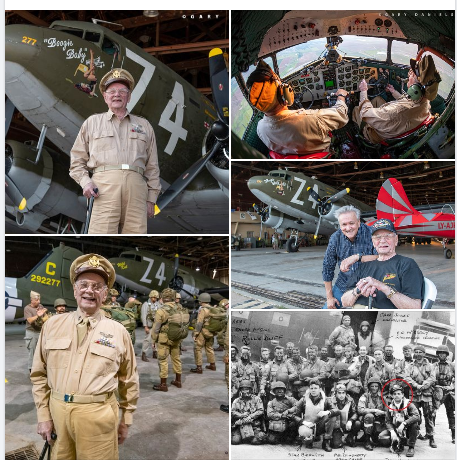 Hamilton recalled that after dropping his pathfinders at around 800 feet, he dove down to about 100-150 feet and pushed his C-47 as fast as he could, wanting to get out of Normandy and over the English Channel on his way home to his base in England at RAF North Witham. As he was making for the French coast, his aircraft was taking anti-aircraft and small arms fire. On their return to England, more than 200 holes were counted in his C-47. Now, 77 years later, Hamilton is the last surviving Pathfinder pilot of that fateful 20-ship mission.

Hamilton also dropped Pathfinders during Operation Dragoon in August 1944. Operation Dragoon was the invasion of southern France. In September 1944, he flew five missions during Operation Market Garden in the Netherlands. The Allies received a bloody nose in the ill-fated operation and had to withdraw to fight another day. In December 1944, he led several C-47s to Bastogne to airdrop supplies to the surrounded 101st Airborne during the Battle of the Bulge. Several aircraft were lost on that mission. Hamilton was awarded four Air Medals for his service.

Hamilton left the U.S. Army Air Force when World War II ended and flew C-47s, C-54s and Constellations for American Overseas Airline. In 1950, he was recalled into the U.S. Air Force to serve in the Korean War and flew 51 combat missions in the Douglas B-26. Hamilton would be awarded an additional five Air Medals and the Distinguished Flying Cross for his service in Korea. After the Korean War, and throughout the 1950s, he flew various jets including the F-86D. Dave retired from the U.S. Air Force in 1963 as a Lt. Colonel serving in defense intelligence.

Having an American hero visit ADT and fly its C-47 was a high honor for the team. Hamilton spent several days at the Summer Jump School and was treated like royalty. He enjoyed recalling his wartime experiences to the rapt attention of the students and team members during his visit. He is already making plans for his 100th birthday flight on July 20, 2022! Thank you for your service Lt. Col. Hamilton…and Happy Birthday!

Note: attached is a photo taken the evening of June 5, 1944 showing the crew and 82nd Airborne Pathfinders he carried to France later that evening. I have circled 21 year old Mr. Hamilton in the photo.

Enjoy the photos taken by Gary Daniels. You can learn more about Gary Daniels' aviation photography at https://aviationphoto.org/gary-daniels/.