PEACHTREE CITY, GA, (Aug. 1, 2022) – All of the sections of a rare P-47 Thunderbolt WWII fighter have arrived at The Commemorative Air Force (CAF) Airbase Georgia in Peachtree City, Ga. The P-47 is expected to be a long-term restoration project and when complete it will join the noteworthy Airbase Georgia fleet of operating aircraft, including its Dauntless SBD dive bomber, P-51 Mustang, FG-1D Corsair and P-63 Kingcobra. The Airbase is currently restoring two additional WWII training aircraft, a Boeing-Stearman N2S and a PT-19 Cornell.

The Thunderbolt was a highly acclaimed WWII fighter known for its combat effectiveness. It also had a strong presence in the Georgia Air National Guard after the war when the 128th Fighter Squadron at Marietta Army Airfield was equipped with P-47N Thunderbolts. The 158th Fighter Squadron, activated at Chatham Army Airfield, Pooler, also flew P-47Ns. The specific aircraft at Airbase Georgia did not see WWII combat, but it was used effectively in Nicaragua and Guatemala in the 1950s. The CAF acquired the aircraft in 1962 but it was heavily damaged in 2012 when it caught fire during takeoff, severely burning part of the fuselage and the right wing.

“We are proud that Airbase Georgia has been selected to restore this important piece of WWII history,” said Airbase leader Joel Perkins. “Our skilled mechanics will restore and replace parts and eventually complete the P-47 by adding an engine and modern avionics. This will require painstaking work, but the final product will be a beautiful, flying warbird that will serve the mission of the CAF, be in demand for airshows around the country, and inspire the next generation of pilots, mechanics and citizens.” 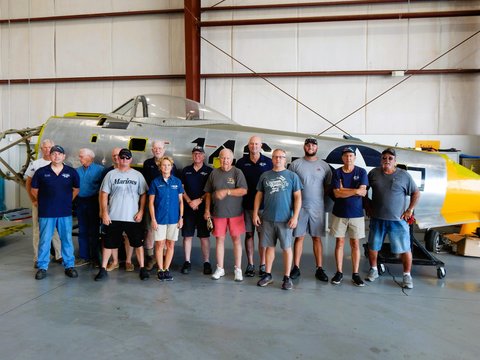