Second Arsenal of Democracy to Take Flight Over Washington, DC on May 8, 2020

Washington, DC, January 7, 2019 –– The Arsenal of Democracy Executive Planning Committee today announced that it is planning a second Arsenal of Democracy Flyover that will take place on Friday, May 8, 2020, to commemorate the 75th anniversary of the end of World War II (WWII) in Europe.

As part of a thrilling two-day celebration in the nation’s capital, the flyover will coincide with a ceremony for veterans at the National World War II Memorial, and will consist of a vast assortment of U.S. and Allied WWII aircraft flying overhead in 24 separate historically sequenced warbird formations. The formations will represent the War’s major battles, from Battle of Britain through the final air assault on Japan, and conclude with a missing man formation.

Nearly 100 vintage warbirds of various types are expected to participate. Aircraft are being provided by multiple organizations and individuals whose mission is to preserve these historic artifacts in flying condition. These organizations include the largest vintage military aircraft organization — the Commemorative Air Force (CAF) — providing fighter, bomber and transport aircraft. Additionally, organizations such as the Dakota Territory Air Museum, Fighter Factory, Friends of DOC and Fagen Fighters, among many others, have thus far committed multiple aircraft, along with individual warbird owners. The historical aircraft expected to participate include the P-40 Warhawk, P-39 Airacobra, P-38 Lightning, P-51 Mustang, P-47 Thunderbolt, F4U Corsair, B-25 Mitchell, B-17 Flying Fortress, Lancaster, Spitfire, Hurricane and many others.

On the day of the flyover, the Dwight D. Eisenhower Memorial Commission will dedicate the Dwight D. Eisenhower National Memorial, which is being constructed directly across from the Smithsonian’s National Air and Space Museum adjacent to Independence Avenue, S.W. The Memorial will honor Dwight Eisenhower as the 34th president of the United States and as Supreme Commander of Allied Forces in WWII, recognizing Eisenhower as the last military general to serve as president of the United States and one who led the Allied Forces to victory in Europe. Among the many combat veteran WWII aircraft participating, a special formation of C-47 aircraft will fly over the new memorial, led by the C-47 That’s All, Brother, which was the actual transport to first drop paratroopers during the Normandy invasion. 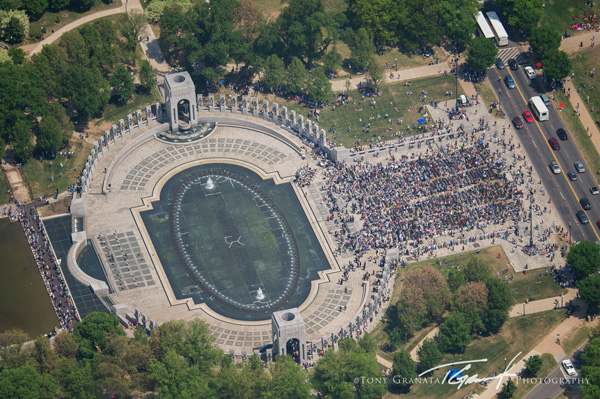 The United States manufactured about 300,000 aircraft, 2.4 million military vehicles, and 124,000 military ships to support the U.S. and Allied War efforts. The ramp-up in manufacturing was extraordinary. Before entering the War, for example, annual production of military aircraft was less than 6,000 aircraft in 1939, but after President Franklin D. Roosevelt called in a May 1940 speech for 50,000 aircraft to be made each year, production rose dramatically—reaching its peak in March 1944, when 9,000 planes were produced that month. Millions of American men and women worked on the home front to manufacture the aircraft, ground vehicles, and ships that significantly propelled U.S. and allied forces to victory in June of 1944.

In addition to the flyover, Arsenal of Democracy events will include a gala dinner on Thursday, May 7, 2020, in historic Hangar 7 located at Ronald Reagan Washington National Airport. The dinner, which will pay tribute to WWII veterans, will feature combat heroes sharing their personal stories of experiences. 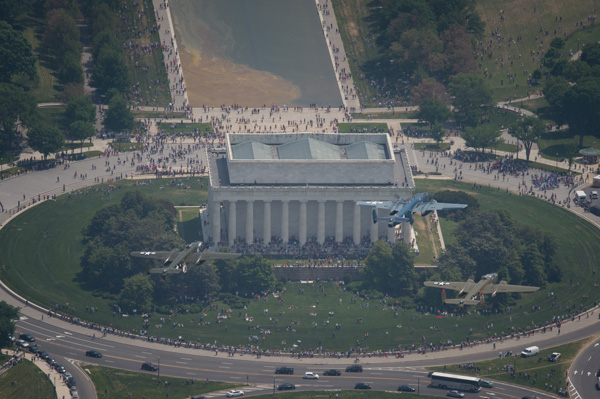 “Just as in 2015, this flyover will be conducted for the sole purpose of honoring those who fought in the epic struggle and the men and women on the home front who created The Arsenal of Democracy. We hope that by recognizing their sacrifices and achievements, all Americans, especially our younger generations, can reflect and be inspired by what can be achieved when a nation unites for a common and just purpose.” -GAMA President and CEO Pete Bunce

“It is a great honor for the Commemorative Air Force to once again play a leading role in such a powerful event. Our mission; to educate, inspire and honor is embodied in this exhibition. The Arsenal of Democracy is a moving and dramatic show of American ingenuity, history and contribution to global freedom. The CAF will be providing several aircraft to participate in the flyover.” -CAF President and CEO Hank Coates

“It is a great honor for the Commemorative Air Force to once again play a leading role in such a powerful event. Our mission; to educate, inspire and honor is embodied in this exhibition. The Arsenal of Democracy is a moving and dramatic show of American ingenuity, history and contribution to global freedom. The CAF will be providing several aircraft to participate in the flyover.” -CAF President and CEO Hank Coates

“Our flyover down the National Mall on May 8 will be the most visible event of the weekend, but we have also scheduled a number of supporting events, including a gala dinner on the evening of Thursday, May 7, a static display of the participating aircraft at the Manassas and Culpeper airports on the days preceding the flyover, and a similar display of some of the participating aircraft on the day following the flyover.” -ICAS President and CEO John Cudahy 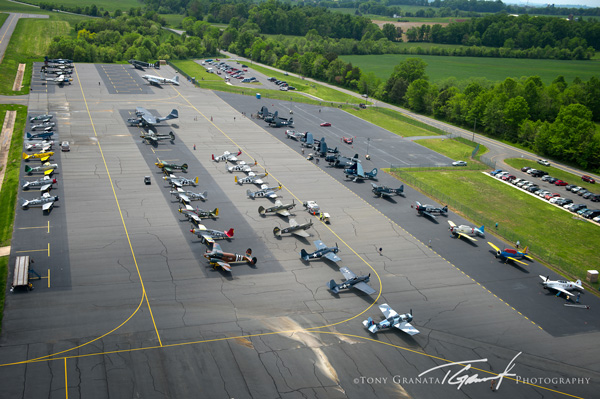 “NATCA and the 20,000 aviation safety professionals we represent are very honored to again be a part of the Arsenal of Democracy Flyover. Our members are proud public servants who have a deep passion for aviation and a rich appreciation for history. We also represent many members who are military veterans. We look forward to continuing to show our respect for a key anniversary in our nation's history by commemorating it with honor and guiding the warbird pilots safely throughout the event.” -NATCA Executive Vice President Trish Gilbert

“The World War II Arsenal of Democracy Flyover will honor the Greatest Generation for their bravery and remind young people about how America and the world came together to fight tyranny. As the largest community of pilots and aviation enthusiasts, the Aircraft Owners and Pilots Association is proud to help plan and execute this memorial to those who gave so much so we could be free.” –AOPA Vice President of Airports and State Advocacy Mike Ginter

Additionally, USS Missouri Memorial Association President and CEO Mike Carr announced that the Battleship Missouri Memorial will commemorate the 75th anniversary of end of WWII in the Pacific with programs and ceremonies highlighting the transition from war to a global commitment to peace and friendship beginning on August 29, 2020, and culminating in a special ceremony on September 2, 2020. The September 2 ceremony will pay remembrance and tribute to the historic signing of the document of surrender on the deck of the Battleship Missouri on September 2, 1945, which brought WWII to an end. It will take place on Pier Foxtrot 5 in Pearl Harbor, Hawaii, where the historic ship is permanently docked and is near the Pearl Harbor Aviation Museum on Ford Island. Guests of honor will include those who witnessed the ceremony aboard the USS Missouri in 1945 as well as representatives of the signing nations as part of activities that will span several days.

“The anniversary event is free and open to the public under the theme Salute Their Service, Honor Their Hope. The Battleship Missouri Memorial aims to pay tribute to those who gave the ultimate sacrifice in restoring peace to the world and bring awareness to future generations of the Mighty Mo as a historic attraction and national treasure.” -USS Missouri Memorial Association President and CEO Mike Carr

More information about the Arsenal of Democracy Flyover and sponsorship opportunities are available on the website at www.ww2flyover.org. Members of the media should contact GAMA Director of Communications Sarah McCann at ww2flyover@gmail.com or call 202-393-1500 for additional information.

The Arsenal of Democracy Flyover is a 501(c)3 entity.

** The aircraft listed have agreed to participate in the flyover, but due to factors such as weather or mechanical issues, participating aircraft are subject to change without notice. The most accurate information can be located on the website at www.ww2flyover.org.