85th Anniversary of first flight-Sentimental Journey for a Flying Fortress

Sentimental Journey for a Flying Fortress

September 4, 2020, Article and Photos by Steve Johsz- This year will mark the 85th anniversary of the first flight of Boeing’s Model 299 bomber, later to be dubbed the B-17, in July 1935. The aircraft nicknamed “Flying Fortress” (based on one Seattle newspaperman’s description after he first saw the airplane) later became the workhorse of World War II strategic bombing missions over Europe.

I was lucky enough to be on the crew of the CAF's B-17 Sentimental Journey that included Frank Nagle, Sam Korth, Dick Churchill and several other CAF Airbase Arizona members during the huge 50th anniversary celebration sponsored by the Boeing Management Association and held over a three-day period in July 1985. The event at Boeing Field in Seattle included 21 bomb group reunions and was attended by approximately 14,000 thousand World War II veterans and their families, along with thousands of other former defense workers and visitors.

The first day festivities, Bomb Group Day on July 26, was reserved for air and ground crewmen and their families and featured speeches, big band music, aircraft fly-bys and a memorial service honoring those who lost their lives in the air during World War II. The featured speaker, retired Air Force General Curtis LeMay, a former division commander of the Eighth Air Force, told the audience that strategic bombing never was given a real chance in Europe during World War II. LeMay said that if the long-range bombers such as the B-17 had been used to the fullest, the invasion of Normandy would not have been necessary. At least, he said, thanks to air power, specifically the delivery of atomic bombs by B-29s, the war against Japan ended without an invasion of the Japanese homeland, an event that would have resulted in millions of American and Japanese casualties. 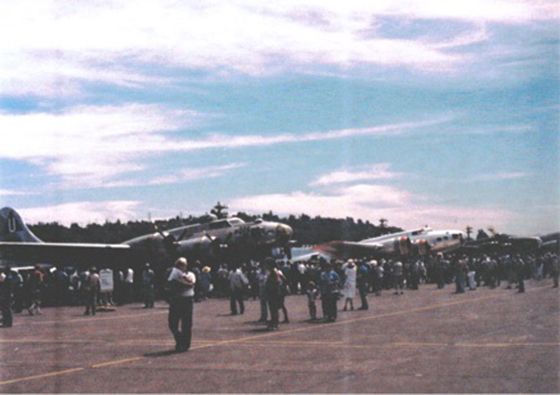 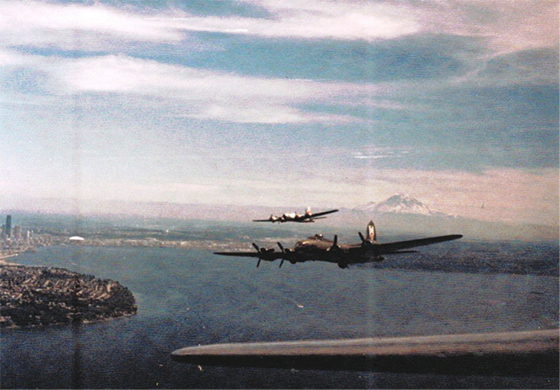 Another speaker during the formal program was Ed Wells, one of the key aeronautical engineers involved in the B-17 design and the man who became project engineer on the bomber project. Wells noted that the Flying Fortress was designed, built and flown in less than one year. Three B-17s, along with a B-25, P-51s, a P-47 and several other World War II aircraft participated in the event, both as static displays and in the fly-bys. The B-17s included the CAF Airbase Arizona's B-17G Sentimental Journey, the Boeing Museum of Flight’s (Bob Richardson’s) B-17F and a B-17G owned by Dave Tallichet.

Five men who were awarded the Congressional Medal of Honor during B-17 service were introduced to the crowd. Earlier they had taken rides on the bombers. Three of those men, William R. Lawley, Jr., Edward S. Michael and John C. Morgan, flew on Sentimental Journey. After the flight, William Lawley Jr. was asked if being back in a B-17 was an emotional experience. “I wouldn’t say that it was emotional,” he said. “It was a great thrill. They had us sit in the radio room, and then invited us up front one at a time. I sat in the left seat and flew for a few minutes in formation. I did a slow 360-degree turn. It was great fun after all these years.” Lt. Lawley received the nation’s highest award for valor by bringing a B-17 home to England on Feb. 20, 1944, after his aircraft was attacked by 20 German fighters. His co-pilot was killed and the aircraft’s controls were shot away. Lawley was seriously wounded, but decided to stay with the aircraft because of wounded men aboard who could not bail out.

Another passenger on that flight was Lt. John C. Morgan. If any of you have ever seen the movie "Twelve O’clock High," (and I bet most of you have!) you are familiar with Lt. Morgan’s story. Quoting from his official citation regarding his July 28, 1943 heroics: “A frontal attack placed a cannon shell through the windshield…the pilot’s skull was split open…leaving him in a crazed condition. The wounded pilot still offered desperate resistance in his crazed attempts to fly the airplane. …Flight Officer Morgan made his decision to continue the flight and protect any members of the crew who might still be in the ship and for 2 hours he flew in formation with one hand at the controls and the other holding off the struggling pilot… The miraculous and heroic performance of Flight Officer Morgan on this occasion resulted in the successful completion of a vital bombing mission and the safe return of his airplane and crew.” 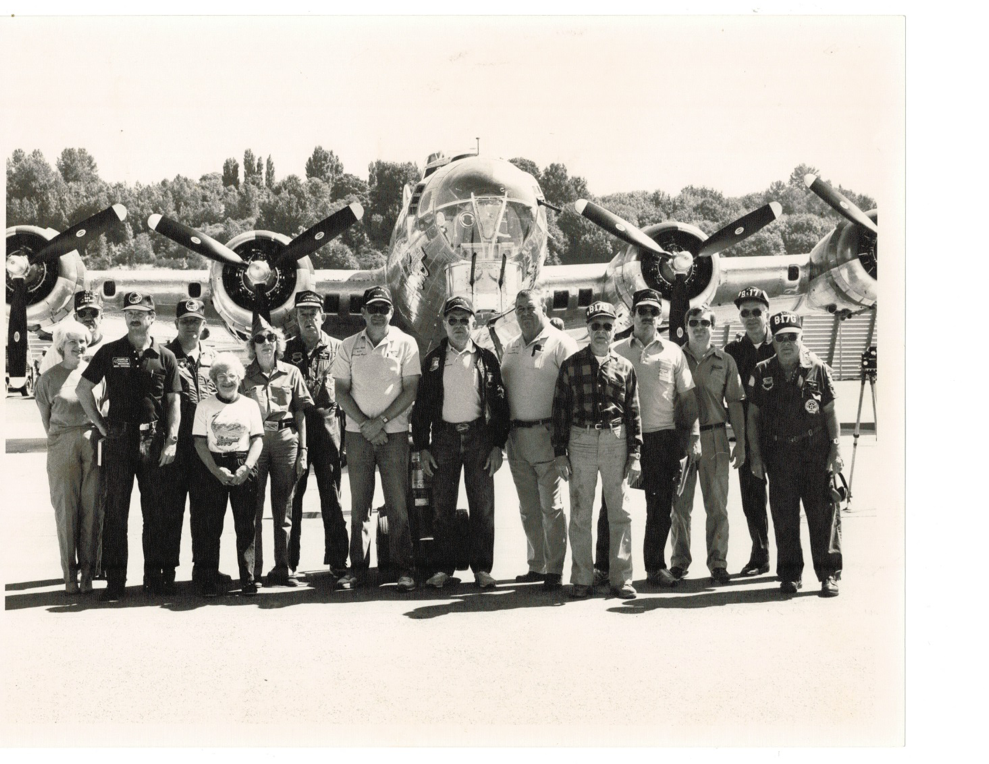 After the flight, our crew was assisting the Medal of Honor recipients exit Sentimental Journey and an emotional John Morgan turned to us and said, “You have added ten years to my life,” bringing tears to our eyes! Hearing something like that from a true American hero was overwhelming and one of the reasons we do what we do in the CAF.

Friday’s festivities were not over just yet. At 1700 that evening, the veterans and guests were treated to a reception in the Burlington Northern Hangar with music of the Glenn Miller era. Performers included Tex Beneke, Marion Hutton, Frankie Lane, the Crew Chiefs and Kay Starr. The music, dancing and conversations with the veterans and their families added up to a truly memorable evening.

On July 27 and 28, the public was invited to the party. Over the course of those two days about 12,000 people viewed the exhibited aircraft, toured through Sentimental Journey, listened to speeches from Boeing executives and guest speakers, were entertained by the Air Force Band, and enjoyed aircraft fly-bys. Perhaps in 15 years the CAF, and particularly Airbase Arizona and Sentimental Journey, will be able to attend the 100th anniversary of the first flight of the B-17. Sentimental Journey will be around for it; I hope I am too!

To earn more about about the Commemorative Air Force search #WhyWeFly!

Check out this B-17 Sentimental Journey Video