WHITEMAN AIR FORCE BASE, Mo. – Press Release-U.S. Air Force Reserve A-10 pilots from the 303rd Fighter Squadron are scheduled to fly a 2-ship of A-10 Thunderbolt II attack aircraft over the Kansas Speedway for the first race of the 2021 season. The NASCAR Cup Series flyover will happen at approximately 2:00 p.m. CST on May 2. The flyover will be supported by the 442d Fighter Wing maintainers launching the A-10s, more commonly known as the “KC Hawgs”.

Continuing a lasting relationship with our community partners, the Kansas Speedway, the A-10s will kick-off the race with a demonstration of close air support for the stadium and television audiences.

“NASCAR racing fans are known for being patriotic. We are truly honored to be partnering with the Kansas Speedway and excited for the opportunity to showcase raw American airpower for the first race of the 2021 season” said Col. Mike Schultz, commander of the 442d Fighter Wing. “We give our sincere thanks to the NASCAR organization and its fans for their continued support.”

The A-10 is the number-one close air support platform in the world and Air Force Reserve Command’s only combat coded A-10 fighter wing. It is operated out of Whiteman Air Force Base, Missouri, 45 miles east of Kansas City.

The pilots and maintainers from Whiteman AFB will be available for media engagements and interviews at Kansas Speedway on game day or prior. For more information, contact the 442d Fighter Wing Public Affairs at 660-687-5918, or by email at 442dfighterwingpa@gmail.com. 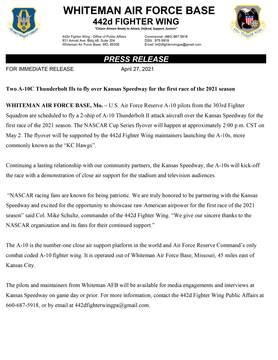