(June 3, 2019, Dallas) - World War II Pathfinder pilot Lt. Col. David Hamilton (97) returned to the same British airfield from which he and fellow pilots launched their pre-invasion strike on June 5, 1944. Hamilton’s visit to former RAF North Witham in Lincolnshire, England, on June 2, is part of the activities surrounding the 75th anniversary of the commencement of the Liberation of Europe, better known as D-Day. Hamilton is the last surviving Pathfinder pilot from a dangerous and top secret mission. 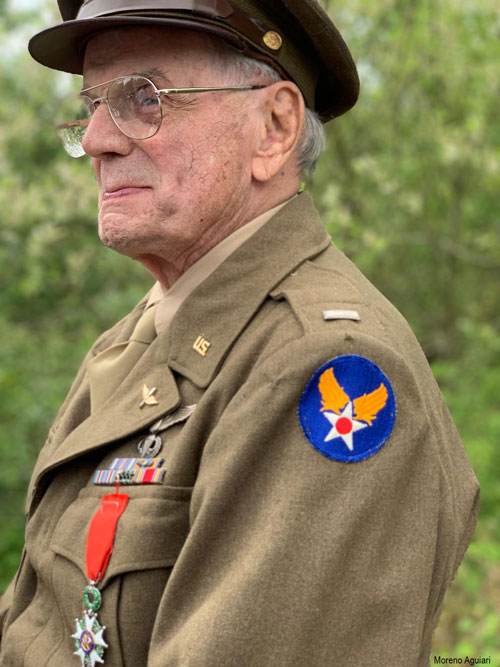 “Dave Hamilton is a true American hero,” said Hank Coates, president and CEO of the Commemorative Air Force (CAF). “He and his fellow Pathfinders flew a dangerous and vital mission in advance of the main D-Day invasion. We are grateful to have the opportunity to organize this trip for Dave, giving him a chance not only to return to his old airfield, but to share his story with the residents of North and South Witham.” 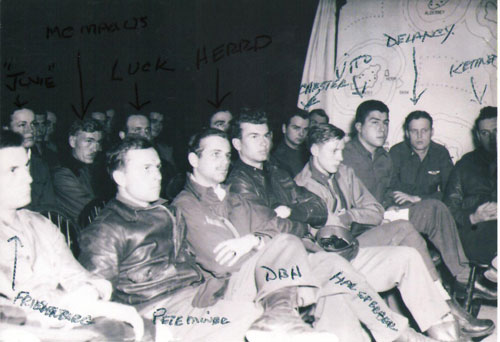 They spent months at RAF North Witham training in secrecy for the mission - to land in darkness behind enemy lines, secure landing areas and set up navigational aids to guide in the main airborne invasion force of C-47s carrying paratroops and towing gliders. At 21.54 hours on June 5, 1944, the first of their 20 Douglas C-47 Skytrain aircraft took off from RAF North Witham – USAAF Station 479 – laden with specially trained paratroops and flying at 50 feet over the English Channel to dodge the radar. The Allied amphibious fleets were well on their way to Normandy when the Pathfinders took to the air. Aircraft jumpmasters would have witnessed the spectacle of the Allied fleet crossing the Channel as they passed overhead.

Within hours, hundreds more airborne troops would land in Normandy, many transported in C-47s flying from airfields around Grantham. They were joined by more paratroopers and assault gliders from bases in southern England.

Hamilton flew as a Pathfinder pilot during World War II for the Normandy mission, Operation Dragoon in Southern France, Operation Market Garden in Holland, and led the supply planes into the 101st Airborne when they were surrounded during the Battle of the Bulge. He continued his service into the Korean War where he flew 50 combat missions in B-26s, and shares his experiences with the public at air shows and other events. Hamilton was taken on a tour of the airfield, its runways now overgrown but still atmospheric, publicly accessible and with little trace of the huge American operation that existed in 1944, when it was home to more than 3,000 American troops. He then traveled to South Witham where he was joined by local school children for the unveiling of a commemorative bench marking the 75th anniversary of D-Day, paid for by sales of ‘poppy cushions’ made by pupils. 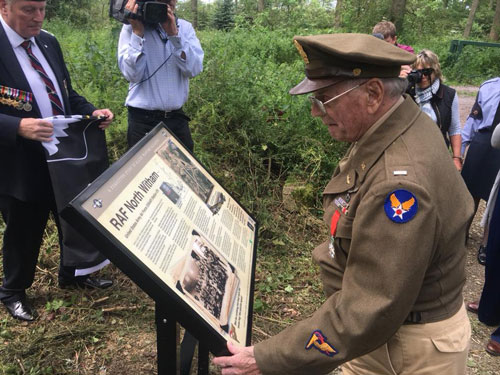 While visiting the RAF North Witham, Hamilton was honored with a flyover of the Commemorative Air Force’s C-53 D-Day Doll. One of D-Day Doll’s pilots, Bill Prosser said, “It was our honor to be able to give him a salute and bring back the sights and sounds of World War II to the old airbase. Opportunities like this are why we are here.”

Hamilton’s trip to England and then onto Normandy was made possible through donations from CAF supporters and is part of a larger schedule of activities surrounding the 75th Anniversary of D-Day. The Commemorative Air Force, along with many other organizations, will participate in a mass flyover of American aircraft, known as the D-Day Squadron. The main event is scheduled for June 5, 2019, Daks Over Normandy, where about 30 aircraft from around the world will fly across the English Channel with hundreds of paratroopers reenacting the mass-paratroop drop of the Normandy Invasion. Hamilton will be aboard one of those C-47s, Pan Am, to reenact his original cross channel flight.

About Commemorative Air Force (CAF): The CAF was founded in 1957 to acquire, restore and preserve in flying condition a complete collection of combat aircraft which were flown by all military services of the United States, and selected aircraft of other nations, for the education and enjoyment of present and future generations of Americans. Today, the CAF has nearly 12,000 members and a fleet of more than 170 vintage aircraft. Headquartered in Dallas, Texas, the CAF’s mission is to Educate, Inspire and Honor through Flight. For more information visit CommemorativeAirForce.org.

About the D-Day Squadron: The D-Day Squadron is the part of the Tunison Foundation, a non-profit 501(c)(3) charitable organization. In June 2019, the D-Day Squadron will lead an American fleet of historic, restored C-47 World War II military aircraft in Daks Over Normandy, a flyover of more than 30 international aircraft to drop 250 paratroopers over the original 1944 drop zones in Normandy commemorating the 75th anniversary of D-Day. Learn more at www.DDaySquadron.org.