Coronado, California, June 5, 2020- In conjunction with Carentan, France, World War II Paratrooper "Screaming Eagle" Tom Rice will ring Liberty Bells in Coronado, California, in the United States to support "Les Clochers de la France." Les Clochers de la France which means "The Bell Towers of France," is a movement where servicemembers and representatives will be ringing liberty bells in their cities. This event will be done globally with World War II veterans.

"With museums and other D-Day commemorative sites likely to be closed on June 6, one museum director is arranging for bells in churches across France to ring out instead."

Patrick Fissot, Nicholas Bellee, and Emmanuel Allain of the Normandy Victory Museum, came up with the idea when they received news of the death of two American veterans who had formed strong links with the community of Carentan where the museum is located. They had visited the museum nearly every year, and the group was dismayed that there would likely not be any events to commemorate the D-Day anniversary this year in the area.

“I remembered the stories of how all the church bells started ringing on D-Day and I thought it would be wonderful if we could do something similar. When I put the idea on to our museum group the response was enthusiastic, then word spread, and we have had people from the north and east of France who want to join,” said Fissot. 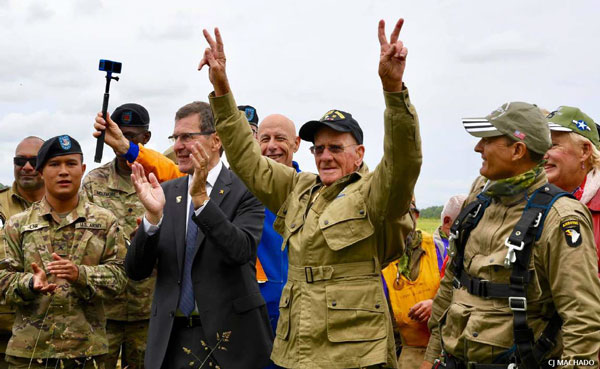 Tom Rice,98, is a World War II Paratrooper, a former Screaming Eagle, that jumped into Carentan, France on June 6, 1944 to help liberate France from Nazi Germany. Rice, who lives in Coronado, California is committed to remembering and honoring the 76th anniversary of D-Day in a unique way. This year Rice will fly over his hometown in California as Mayor Jean Pierre L' honneur rings the "Les Clochers de la Liberte" (Liberty Bells) in the city of Carentan.

For the commemorative flight, Rice will be aboard the CAF Inland Empire Wing’s C-53 D-Day Doll, based in Riverside, California.

To learn more about the event visit https://freedomrings.global/