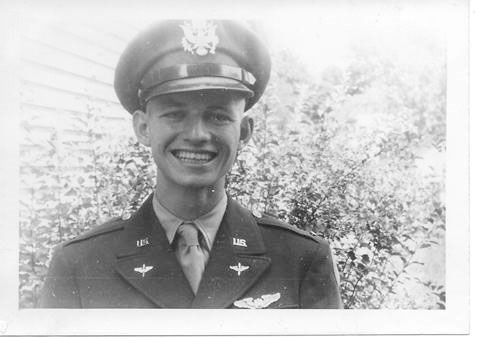 Pepper served as a pilot in the 403rd Troop Carrier Group, the 64th Troop Carrier Squadron in Guadalcanal and the 13th Army Air Force. He flew twin-engine planes (including a C-47) without a navigator, relying simply on sight, radio, compass, waves, or the instruments of the day. Logging over 1,200 hours of flight time before the end of the war. Pepper successfully executed many drop and resupply missions and troop transports and earned many medals for his distinguished performance.

Tockr initially launched its line of D-Day watches in late 2018. The stainless-steel watches contain a dial made from salvaged aircraft material from an aircraft called That’s All, Brother, the World War II transport aircraft that led the main aerial invasion into Normandy. Pepper’s grandson contacted Tockr to purchase a watch as a gift to honor his grandfather’s service. When Tockr learned that Pepper had served in World War II, Tockr Founder Austin Ivey and Co-Founder Sophy Rindler decided to name the new watch after Pepper. They also planned to fulfill one of Pepper’s lifelong wishes: to see a World War II-era airplane again.

"The Tockr team approached the Commemorative Air Force, a World War II flying museum, to help make Pepper's dream come true. Together we helped him experience flying on a World War II airplane one more time. We also gifted him with the #1 of the new limited edition of our bronze D-Day watch series. We named the limited-edition series in his honor: D-Day C-47 "Alfred Pepper." The bronze D-Day C-47 watch series is limited to 75 pieces to mark the 75th anniversary of D-Day this year. This has been an incredibly emotional journey for the Tockr team, and we are so grateful to be a part of this amazing moment. Since the D-Day C-47 watches launched, we’ve been able to connect with many people and hear their inspiring stories of service and sacrifice,” said Austin Ivey.

Tockr and Commemorative Air Force arranged the event for the Ohio-based veteran on Monday, May 13, at Grimes Airport in Urbana, Ohio. There they presented him with his own new “Alfred Pepper” watch. After the presentation Pepper was welcomed aboard a C-53 named D-Day Doll. The Commemorative Air Force owned, C-53 D-Day Doll, participated in many World War II missions, including D-Day. Today, the aircraft is operated by an all-volunteer aircrew based out of Riverside, California. The aircraft stopped in Ohio enroute to the East Coast, where it joined with other World War II transport aircraft. A contingent of 15 World War II transport aircraft from across the U.S., called the D-Day Squadron, departed the U.S. and is heading to Europe. The D-Day Squadron will take part in several events commemorating the 75th Anniversary of D-Day including Daks Over Normandy, a mass paratroop drop including dozens of C-47 aircraft and more than 200 paratroopers crossing the English Channel.

A portion of each D-Day C-47 “Alfred Pepper” watch sold at tockr.com/dday will support Commemorative Air Force’s restoration and maintenance of C-47 That’s All, Brother. 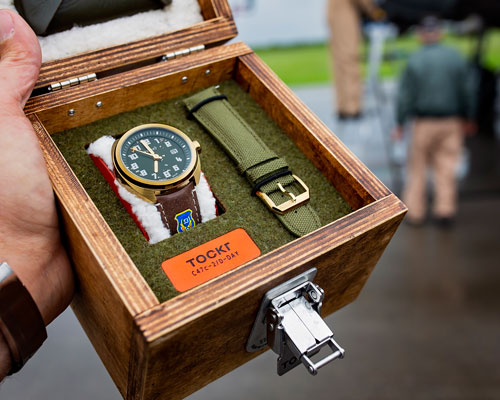 Since late 2018, Tockr has released two 100-piece editions of the D-Day C-47 watch in stainless steel, and the 75-piece bronze limited D-Day C-47 “Alfred Pepper” series is the latest extension of the collection, designed and produced by Tockr to mark the 75th anniversary of the D-Day invasion. No more than 500 D-Day C-47 watches will ever be made by Tockr, and no more than 75 bronze watches of that series will be made.

Through an anti-glare sapphire crystal, the wearer can admire each precious piece of history, preserved beneath a special anti-corrosion sealant. An airplane-shaped second-hand, coated in vivid orange SuperLuminova, ticks along over the dial, visually linking the watch to the storied That’s All, Brother aircraft. The Austin, Texas-based brand commissioned legendary watch designer Emmanuel Gueit to design a 42mm cushion-shaped case for the watch series, and the case also houses a Swiss automatic ETA 2834 A6 movement that is assembled in Switzerland. Each Tockr D-Day C-47 “Alfred Pepper” model comes presented in a military-inspired, keepsake wooden box with two straps: a drab green strap made from canvas webbing and a brown leather band.

The Tockr D-Day C-47 “Alfred Pepper” retails for $2,700 and will be available for sale at tockr.com/dday.

About Tockr™: Tockr™ is an American watch brand with a Swiss-made heart, founded in Austin, Texas in 2017. Inspired by his own experience as a pilot and the legacy of his grandfather, a U.S. Army pilot who flew C-47 aircraft during World War II, Founder Austin Ivey set out to combine his lifelong passions of watches and aviation in an accessible collection of aviation-inspired watches. In a short time, Tockr’s iconic C47 and Air Defender watch collections have already captured the imagination of watch enthusiasts around the world. Discover the universe of Tockr at tockr.com.

About the Commemorative Air Force: The Commemorative Air Force is a 501(c)(3) non-profit organization based in Dallas, and the recognized leader of the Warbird Movement—the effort to preserve and honor American military aviation history. Since it was founded in 1957, the CAF has accrued 170 historic aircraft—the largest collection of vintage military aircraft in the world. Educational outreach programs impact an estimated 20 million Americans each year thanks to over 12,000 volunteers who support the CAF nationally and overseas. The Commemorative Air Force honors the men and women who built, maintained, and flew in American airplanes during World War II. The organization believes that is best accomplished by maintaining the airplanes in flying condition; taking the airplanes to the people, allowing them to experience the sight and sound of the aircraft in flight. For more information, visit www.commemorativeairforce.org.