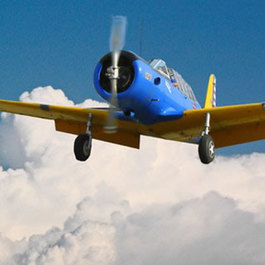 The Vultee BT-15 was the basic trainer flown by most American pilots during World War II. It was the second phase of the three phase training program for pilots. After primary training in PT-15, PT-17, or PT-19 trainers, the student pilot moved to the more complex Vultee for continued flight training. The BT-15 had a more powerful engine and was faster and heavier than the primary trainer. It required the student pilot to use two way radio communications with the ground and to operate landing flaps and a two-position Hamilton Standard controllable-pitch propeller. It did not, however, have retractable landing gear nor a hydraulic system. The flaps were operated by a crank-and-cable... ... 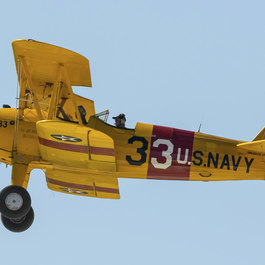 The Stearman (Boeing) Model 75 is a biplane used as a military trainer aircraft, of which at least 10,626 were built in the United States during the 1930s and 1940s. Stearman Aircraft became a subsidiary of Boeing in 1934. Widely known as the Stearman, Boeing Stearman or Kaydet, it served as a primary trainer for the United States Army Air Forces, the United States Navy (as the NS & N2S), and with the Royal Canadian Air Force as the Kaydet throughout World War II. After the conflict was over, thousands of surplus aircraft were sold on the civilian market. In the immediate postwar years they became popular as crop dusters, sports planes, and for aerobatic and wing walking use in air shows. 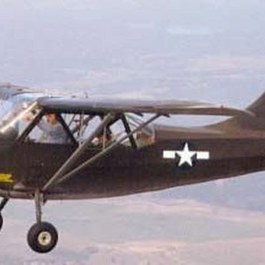 The origins of the L-5, affectionately known as the "Flying Jeep", can be traced to the prewar civilian Stinson HW-75. In March 1943, with the creation of the liaison category of light observation aircraft (previous examples came from Taylorcraft Aircraft as the L-2, and from Aeronca as their L-3, along with the numerous Piper L-4) the designation for Stinson's new purpose-built military design was changed to the L-5. The primary purpose as a liaison aircraft was courier and communication work, artillery spotting and casualty evacuation. The fuselage of later models was redesigned so the aircraft could also be used as an air ambulance, or for cargo work. With a wider and deeper rear... ... 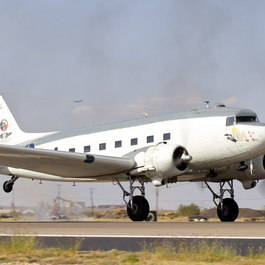 The DC-3 was developed to carry 21 passengers, but our R4D-6S was no mere passenger carrier. She was built as a warbird. Our R4D-6S was modified to carry depth charges on external racks mounted under the fuselage between the main landing gear. She was assigned to the U.S. Navy Atlantic Special Service Squadron and conducted airborne search radar and sonar evaluation as well as training airborne specialists and operators. "Ready 4 Duty" served in the Caribbean from Texas to Guantanamo, Cuba; in South America as far down as Rio; across the south Atlantic to Dakar; in the eastern Atlantic up to Baffin Bay and northern Newfoundland; and across the northern hemisphere to Greenland and... ...

The DFW Wing is home to four fantastic planes which are all flown regularly in support of the CAF Mission. These aircraft are restored, maintained, and flown by our member/volunteers known as Colonels.