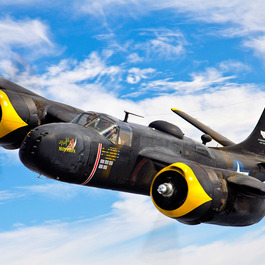 The Commemorative Air Force - Invader Squadron was formed in February 2009 to restore the Douglas Invader, registration number N240P, back to flying condition and in the color scheme of the legendary aircraft; flow by Medal of Honor recipient, Captain John S. Walmsley, Jr. This year, the Squadron has expanded and now is home to a Beechcraft T-34B Mentor. Both aircraft are based at Meacham Airport in the hangar of the Vintage Flying Museum and the Squadron has 100+ members devoted to maintaining and keeping the planes in pristine and flying condition. All members are volunteers and many in addition to devoting their time also make additional financial contributions to the project.

Our Squadron ideals are: The restoration and promotion of the A-26 and T-34B through volunteer supported educational and entertainment events. The promotion and expansion of the Invader Squadron volunteer force with the implicit goal of supporting the Commemorative Air Force and our Squadron aircraft.