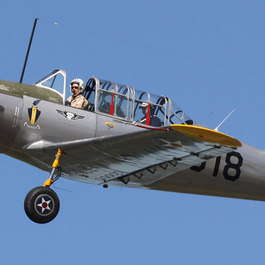 The Consolidated Vultee BT-13/BT-15/SNV family of Basic Trainers first entered service in 1940, and was finally retired in the late 1960’s. The Houston Wing aircraft is a BT-13A; about 7,000 of this model were built. It is estimated that only about 40 remain in flying condition today. The Houston Wing BT-13 spent 30 years as a public attraction on top of a Utah welding shop before being rescued and returned to flight status. A standard BT-13A is equipped a 450 HP Pratt & Whitney R-985-AN-1 radial engine which drives a fixed-pitch propeller (the Houston Wing’s BT-13A has a variable-pitch prop). The landing gear is not retractable, and is not equipped with fairings. Due to the large... ... 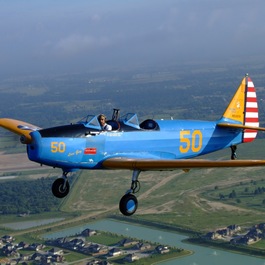 The Fairchild PT-19 “Cornell” was a primary trainer developed for the U.S. Army Air Force. Traditionally, primary training was done using biplanes like the Stearman PT-17 “Kaydet” or Navy N3N. However, later it was felt that the transition from the very stable and forgiving biplanes to the more challenging monoplane basic and advanced trainers was too abrupt; the student would feel overconfident after mastering the biplane and have trouble adjusting to the later monoplanes. Therefore, the Army decided to introduce monoplane primary trainers like the PT-19. With a higher wing loading and stall speed, it was more similar to the next step in the training, the BT-13. Following its... ... 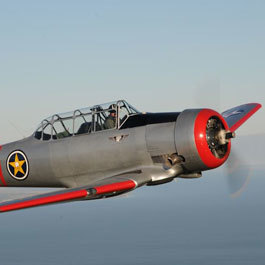 The North American Aviation AT-6 family of Advanced Trainers first entered service in 1938, and variants continued in service until recent times. The aircraft assigned to the Houston wing (affectionately referred to as “Ace”, as it carries the ‘Ace in the Hole’ insignia of the USAF 111th Fighter Squadron) is an AT-6A; about 1,800 were built. The naval version of the AT-6 is the SNJ; the approximate equivalent of the AT-6A is SNJ-3, and another 270 of these were built. In RAF and RCAF service, the AT-6 was known as the “Harvard”; most of these aircraft were built by Canadian Car and Foundry. AT-6A’s were built at the original North American factory in Inglewood, California and at a new... ... 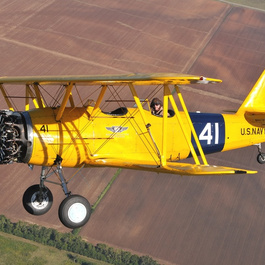 A Primary Trainer designed by the US Navy’s Bureau of Aeronautics, the N3N was built by the Naval Aircraft Factory at Philadelphia, Pennsylvania, and was that facility’s most numerous product. The design was originated in 1934 and was a relatively advanced type in its time. The fuselage structure is of aluminum angle and plate, covered with a combination of fabric and removable aluminum panels. The flying surfaces are covered with fabric. Although the N3N had the semi-official moniker of “Canary”, it was more commonly known as the “Yellow Peril” (a name it sometimes shared with the Stearman N2S Primary Trainer) Most N3Ns were removed from service soon after the end of WWII, but some... ... 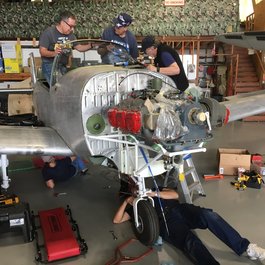 This project is a complete restoration of our L-17, a dedicated group at CAF Houston Wing are leading the restoration and want to encourage anyone interested in helping, learning or contributing in any way to come out and join us. 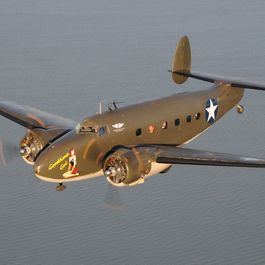 The Lockheed C-60A is a twin-engine transport based on the Model 18 Lodestar. The Model 18 was a civilian airliner, developed as a competitor to the Douglas DC-3. Slightly smaller and faster than the DC-3, it soon was in service with many airlines around the world. At the beginning of the war, 102 Model 18’s in service with U.S. airlines or under construction were impressed into military service; these “drafted” aircraft were designated C-56, C-57, C-59 or C-60 depending on their configuration and engines. The C-60A was the first “Lodestar” which was built specifically for military service. It was used as a cargo aircraft, VIP transport and paratroop transport. C-60As also served with the... ...

The Commemorative Air Force honors the men and women who built, maintained, and flew in these airplanes during World War II. The organization believes that is best accomplished by maintaining the airplanes in flying condition; taking the airplanes to the people allowing them to experience the sight and sound of the aircraft in flight.

Collecting, restoring and flying vintage historical aircraft for more than half a century, the Commemorative Air Force ranks as one of the largest private air forces in the world. The CAF is dedicated to Honoring American Military Aviation through flight, exhibition, and remembrance. A non-profit educational association, the CAF has more than 13,000 members and a fleet of 165 airplanes distributed throughout the country to 76 CAF units for care and operation. For more information, visit www.commemorativeairforce.org

As a unit of the Commemorative Air Force (CAF), we are dedicated to preserving and honoring our military history with the rallying cry to “Keep ‘Em Flying!”

The Houston Wing is based at West Houston Airport, in Houston, Texas, USA. The Wing has six CAF aircraft assigned:

Our museum is staffed on the first and third Saturday of each month from 10 AM until 3 PM. However, we can generally arrange to have the museum open for groups or other visitors at other times with some advance notice.

Most work on the aircraft and the hangar is performed on Saturdays, and on Wednesday evenings. Visitors are welcome during the work sessions (especially visitors who don’t mind getting their hands dirty!).

By 1982, the Squadron had grown to about 35 members and had been assigned its first CAF aircraft, the N3N. This was a true project, with the airframe coming from two separate aircraft and arriving by truck. It would be eight years before its first flight.

Later in 1982, the Squadron was assigned its first flying aircraft, the DC-3 “Dragon Lady”. This was a BIG airplane for a still-small Squadron, and after several years of struggle, it was reluctantly returned to CAF headquarters, with the Squadron focusing on smaller aircraft (for the time being). Over the next few years, the AT-6, the BT-13 (another project aircraft), and a Stinson 108 (now with the Gulf Coast Wing) would be brought into the Squadron. In more recent times, the C-60, PT-19, and Navion would be purchased by the Squadron and donated to the CAF, which then assigned them to the Squadron for operation and care.

In 1985, the West Houston Squadron and the Gulf Coast Wing combined forces to hold the inaugural Wings Over Houston Airshow at Ellington Field (now Ellington Airport). Held every year since, and now jointly presented by the Houston Wing, the Gulf Coast Wing, and the Tora Tora Tora Sponsor Group, it is now one of the largest airshows in the country and attracts fans from all over the world.